Since this life delights you, do you wish to taste it yourself and make fortune of my trial? 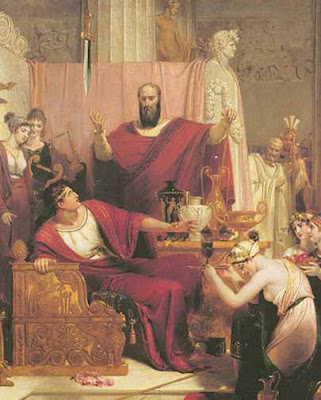 The truth squad caught the latest Federales lie. The Big Lie is always a lie in plain sight. It is discerned by a bottoms -up approach, the application of the empirical method. The first to catch it was the venerable Bill King of the King Report, who actually reads government reports before he comments on them, it was picked up by Art Cashin in his morning note yesterday, and then picked up by the New York Post.

Washington announced last week that retail sales rose a very healthy 1.3 percent during November from the previous month. Wall Street told us to applaud and the media, right on cue, proclaimed that the consumer was back in business.

The trouble is, the 1.3 percent gain was very misleading. In fact, misleading is a kind term for it. It was a lie -- but not one perpetrated by the Commerce Department, which released the figure.

Why am I questioning the 1.3 percent growth in retail sales? Because the Commerce Department questioned it, in a cryptic fine-print note, a sort of footnote, only it was at the top -- the top -- of the press release announcing the figure.

In a box, highlighted in the Dec. 11 release, was this statement: "Special Notice -- The advance estimates in this report are the first estimates from a new sample. The new sample for the Advance Monthly Retail Trade Survey is selected about once every two and a half years." The problem is, you actually have to ask the Commerce Department what that means if you want to know. Government bureaucrats aren't known for clarity. And nobody I could find bothered to ask.

One news organization, which should be ashamed of itself, proclaimed after seeing the release that "consumer spending was solid in November, suggesting that the economy is on sounder footing than previously thought." Not even close…

Well, here's the answer. It seems that the Commerce Department surveyed only 2,600 of the same retailers and restaurants in both October and November. The other 2,700 or so were new to the survey and were only asked about business conditions in November. ..

But this time a lot of the retailers that weren't questioned in November might have gone out of business because of the economy. To borrow a tired, old phrase -- the Commerce Department was trying to tell us that it was comparing apples in October with oranges in November. And the comparison really didn't add up to 1.3 percent growth. But there's more.

That 1.3 percent gain -- even if you were to accept it as valid -- was seasonally adjusted. That means the Commerce Department's computers changed a number here and there because of what has come to be expected over the last five Novembers…

Without the seasonal adjustment retail sales were absolutely flat from October to November -- 0.0 percent. Flat. No change.

AM here : Obviously this does not matter until it does. It is but another piece of kindling on the fire of deceit and fraud.

For this humble blogger, the tipping point for the common man, is looming as a sword of Damocles, the horsehair splintering, the capitulation towards the American Scheme as the American Dream.

The stealth stimulus of sending the banks jingle mail, the vitriol of opinion on both fences couched in either moralizing or justifying, would seem to suggest that many others also view this as a seminal event that will train-wreck itself through 2010.

To understand the markets think of water ... this tide will come back in and drown the fire. And then ... the Federales will spew kerosene.

Some of the smartest folks in the room have recommended that individuals should view their investment portfolio as if they were their own central bank.

The butterfly wings of the bankster enabling Federales and the insolvent prospering banksters, are causing the hurricane that is the true emulation advised in being your central bank... be you're own corporatocracy.

Life liberty and synarchy for all is one hell of a way to go through life son.

On that path, most assuredly the devil will have his due.
Posted by Anonymous Monetarist at 9:07 AM

Thanks for dropping by my blog and commenting. I recently found yours - I like things that makes me look up new-to-me words like "synarchy". XD

I'm a bit curious as to why you didn't want to finger the WSJ (through it's subsidiary MarketWatch) as the party responsible for propagating such profligate propaganda... But I'm happy to do it for you, heh-heh. The level of deceit that's taking place in the media is astounding, and I'm constantly baffled as to how they think it can possibly do any good.

Personally, I think the human urge to freedom is irrepressible, and that either the banksters will wise up and realize that if the base of the pyramid takes a hit, they also fall down several levels, so it's in their interest to have a robust and upwardly mobile base... Or the base will decide to take their marbles and go away.

I have some ideas as to how either of these might happen (and also how they might *both* happen, after a fashion), but I'm more interested in any thoughts you might have on the subject.

'Freedom is just another word for nothing left to lose, Nothing don't mean nothing honey if it aint free.'

Many folks don't speak up because they have too much to lose.

I have spoken to the heads of various Wall Street equity derivative trading desks and every single one of the senior managers told me that Bernie Madoff was a fraud. Of course no one wants undue career risk by sticking their head up and saying that the emperor isn't wearing any clothes. As a result of this case several careers on Wall Street and in Europe will be ruined. Therefore, I have not signed nor put my name on this report. I am worried about the personal safety of myself and my family.'
-Harry Markopolos in 2005.

My feelings on the MSM would be best discerned by using the search box on this blog to Google 'Nancy Capitalists' and 'pablum narrative'.

My thoughts on what might happen is that deflation is the midwife of hyperinflation.

Keep up the good fight Dave.

Remember that those that fail to stand for something will fall for anything.