Success from failure, failure from success; when the student is ready the teacher will arrive 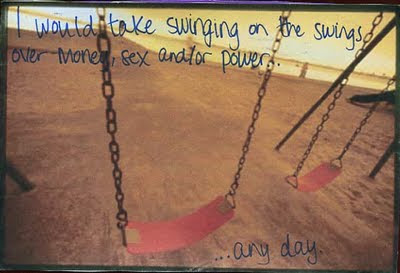 'There is no fate but what we make for ourselves.'
-Kyle Reese

'Progress is impossible without change; and those who cannot change their minds cannot change anything. It's your place in the world, it's your life. Go on and do all you can with it, and make it the life you want to live.'
-George Bernard Shaw

'Failure is success turned inside out.'
-Unknown

'When the student is ready the teacher will arrive.'
-Zen proverb

'To be mindful is a discontinuous process, our senses allow us a glimpse at the perfect form (truth) but that view can often be distorted by the flickering fire of perception that illuminates the shapes we perceive to believe.'
-Anonymous Monetarist

Have learned nothing from my successes for success has nothing to teach.

Failure though has schooled me well. Embracing, accepting and ultimately searching for failure has allowed me to be and accept that I am the luckiest of fools.

Not diminished by failure but rather, shall we say, contained, I am a Black Swan, mindful of my nature to go to extremes, thankful in the wisdom that, while most certainly still under development,keeps me balanced.

Back in the day at the University of Illinois had a classical civ teacher who used to dress up as the Oracle at Delphi every Friday and predict the winner of the upcoming Fighting Illini football game.

The class was huge, about 800 or so students, but this instructor was marvelous, able to connect with you even though he was but a speck on the stage.

One day he said something that I really did not 'hear' until many years later.

He told a story of a Victorious General that was returning to Rome. To honor the General, the Emperor held a gala where throngs of adoring citizens regaled the champion as he was paraded through the city centre with all the pomp and pageantry that could be afforded. The General stood alone in the chariot receiving the adulation of his countryman, alone save for one individual that was placed next to the General. This individual had been assigned a task by the Emperor. His job was to as, the General basked in his glory, whisper into the General's ear every secret, every failing, every unknown known - or in the words of a famous Louisiana politician, every dead girl and live boy - every bit of dirt the Emperor had on the war hero.

The purpose was to make sure that the General's perspective remained, shall we say, balanced.

That is why whenever I feel good about myself I tell myself to go f@&# myself.

There are a lot of folks that we read about nowadays that very much need to get a memo like that.

For as we collectively double down on a lost decade to avoid a lost generation our inability to allow folks to be schooled by failure will ultimately ensure that success will only be achieved ideologically and not literally.

Failure to liquidate the insolvent banksters, failure to implement real insurance, and more importantly entitlement, reform, failure to end the madness of foreign adventurism, is a failure of the tough over the easy and the truth over the specious.

Notwithstanding the claim of that silly television show, most folks do not lie. They are good, reasonable and honest. That is why the Big Lie works. It is so very difficult for them to process that the truths that they hold to be most dear are lies told to them by liars. They just can't grasp the delusion that those in a place of power and privilege have been captured by, a mindset that feeds them the pablum narrative that the ends justify the means.

The cold hard fact of our age is that the bankrupt ideology of the rich that had greatly succeeded in drafting the inner monologue of regular folks so that they would vote against their self-interests is colliding head-on with a Mr. Market that is a bit pissed off that we've inflated it out of the business cycle for the last quarter century.

Reality is the tail risk and payback is a bitch.

I am a fierce social liberal (and fiscal conservative.)

And Barry, if you're losin' me, you are down deep in the hole my friend.

The time will come when you will have to make a choice Mr. Dunham, will you be schooled and do the right thing or will you just ask for a bigger shovel?

Choose wrong and a demagogue like the Manchurian Mountain Mama might just have a shot of taking you on and winning.

If Palin gets in even the most avowed liberal would award Incurious George the Nobel Prize in comparison.
Posted by Anonymous Monetarist at 10:34 AM