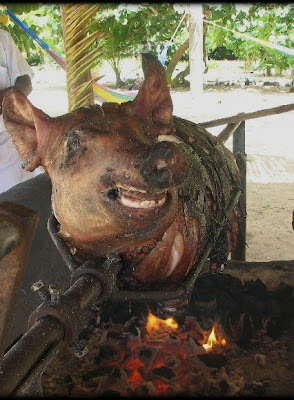 'Some pigs are more equal than others.'
-George Orwell

'If you didn't care what happened to me,
And I didn't care for you
We would zig zag our way through the boredom and pain
Occasionally glancing up through the rain
Wondering which of the buggers to blame
And watching for pigs on the wing.'
-Pink Floyd

'When brokers get on a plane it proves that pigs can fly.'
-Anonymous Monetarist

Some of the most controversial financing practices of the credit-bubble years – from cov lite loans to Pik toggle notes and dividend recap exercises – have returned to Wall Street, stoking fears that debt markets are growing overheated.

The techniques fell into disrepute during the financial crisis because they were based to varying degrees on the same rosy expectations that encouraged companies and consumers to assume what proved to be crippling levels of debt.

In a cov light – short for covenant light – loan, borrowers are granted credit with few, if any, conditions.

Pik toggle transactions make it possible for debt to be repaid with more debt – payment-in-kind notes. In a dividend recap, companies take on additional debt to pay dividends to their owners.

The reappearance of such instruments in recent weeks has stirred concerns that government efforts to stimulate lending are having unintended consequences, encouraging lenders to take positions based on “best-of-all-possible-worlds” assumptions.

Fed policymakers have signalled their concerns about the impact of low rates on market practices.

In the minutes of its November meeting, the Federal Open Market Committee noted “the possibility that some negative side effects might result from the maintenance of very low short-term interest rates including the possibility of excessive risk-taking”.

(And in a related comment the Oracle at Eccles proclaims with guarded confidence that the fiery ball of yellow gas in the sky may be the sun. -AM)
Posted by Anonymous Monetarist at 9:44 AM