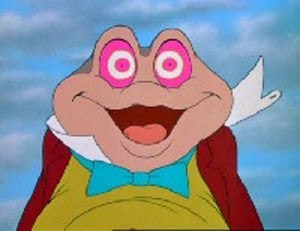 'The distribution of price changes in a financial market scales.
Given that event X has happened, what are the odds that Y will happen next?
With financial prices, scaling means that the odds of a massive price movement given a large one are akin to those of a large movement given a merely sizable one. Such is the confusion of scaling. It makes decisions difficult, prediction perilous, and bubbles a certainty.'
-Benoit Mandelbrot

'This subtle but extremely consequential property of scalable randomness is unusually counter intuitive. It is often said that "is wise he who can see things coming." Perhaps the wise one is the one who knows he cannot see things far away. Newspapers are excellent at predicting movie and theater schedules.'
-Nassim Taleb

As a youngster always read comic books, now its' the Wall Street Journal and the Financial Times. Both fluffy, with an occasional interesting tidbit and sometimes cool art; each medium presents fiction as fact. The latter though specializes in the prognostication of unknowns that through their presentation become knowns. The former usually throws an unknown unknown plot twist at ya.

'But there are unknown unknowns.

What we do not know that we don't know is how the continuing liquidation of Main Street and bifurcation of America will interact with the bankrupt ideology of the rich that had greatly succeeded in drafting the inner monologue of regular folks so that they would vote against their self interests and are trying to do it again.'

Would like to make the correction that these are known unknowns. Presumptuous and fictional to suggest otherwise.

Easy enough for an anonymous blogger to offer a correction, experts can't. For if they did how could they be experts?

First. Iraq and Afghanistan 'unsettled' about our announced withdrawal date.

Second, the financial industry 'unsettled' about an amendment that would require secured creditors under certain circumstances to take losses up to 20% should a financial firm fail.

Both show the conundrum of the government being 'all in' : they just can't ever 'pull out' lest the fragile system collapses. Of course the pablum narrative fails to consider that the only reason the system is so flippin' fragile is because 'we're there' in the first place.

I bet you one rentenmark Mortimer that by the time my newborn goes to college we will still have boots on the ground in Iraq and Afghanistan and the Hand will still be up the back of the 'markets'.

The first 'prediction' based on the imagining of Rahm telling Barry that if we are not over there and something happens over here he won't be able to cut his f%#$@&g legacy out of a wet paper bag with a steak knife and the second 'prediction' based on the Amerikantura knowing the game is so rigged that nostalgia for the good old days of the 'free markets' is for dreamers not schemers. 'Tis the rich man's burden it tis.

We speak of a mild outcome to all this, a new normal, as we stuff the pig on the scale of fate. We are so far down the rabbit hole Alice, so arse over tit, that it is quite plausible that the power law being applied here is masquerading mild as wild as well as its' converse.

What if the mild prognostication is deflation or hyperinflation with either A cascading to B or B cascading to A?

What if the Black Swan is just, hope upon hope, muddling through?

Never fast enough with the mute button after Santelli comes on CNBC, I caught one of the canuckleheads on Hee-Haw muse that golly gee willikers maybe we have to destroy the currency in order to create jobs! Destroy your standard of living to improve it? Nancy Capitalists in a Sovereign Democracy that are hell bent to seek rent.

And the Blacker Swan? Teleportation, room temperature superconductors, fusion ... something 'game changing'. that allows the game to go on?

Its' a madhouse!
Posted by Anonymous Monetarist at 9:04 AM