Kids say the damnedest things, are we stuck in a moment? Lies have consequences. 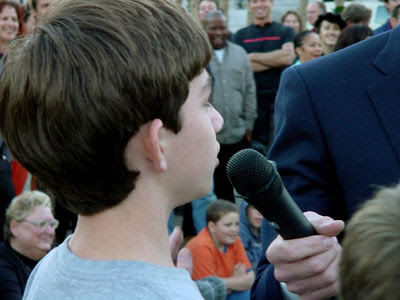 'We may become the makers of our fate when we have ceased to pose as its prophets. It is always flattering to belong to the inner circle of the initiated, and to possess the unusual power of predicting the course of history. Besides, there is a tradition that intellectual leaders are gifted with such powers, and not to possess them may lead to loss of caste. The danger, on the other hand, of their being unmasked as charlatans is very small, since they can always point out that it is certainly permissible to make less sweeping predictions; and the boundaries between these and augury are fluid. If you know that things are bound to happen whatever you do, then you may feel free to give up the fight against them. You may, more especially, give up the attempt to control those things which most people agree to be social evils, such as war; or, to mention a smaller but nevertheless important thing, the tyranny of a petty official.' -Karl R. Popper

'For a moment there, I thought we were in trouble'
-Butch Cassidy

Back in those days, before the Federales massaged the relevancy of statistics into the pablum narrative rabbithole it was pretty simple to calculate the unemployment rate.

Of course back then the labor force grew, now we bid the unemployed adieu.

And back then the labor force was 'defined' a tad differently.

From the Congressional Research Service's : The Labor Market during the Great Depression and the Current Recession.

The 1940 census of the population was the first statistical undertaking to include questions on the labor force defined as persons who are employed or without jobs but actively seeking work within a prescribed period of time. Before then, the 1930 census of the population, the 1937 census of unemployment, and the occasional survey conducted in various states and cities utilized a very different concept—the “gainful worker”—that is, individuals who had at some time worked in an occupation in which they earned money or the equivalent, or in which they assisted in the production of marketable goods.

With passage of the Fair Labor Standards Act (FLSA) in 1938,the age limit for employment in manufacturing industries was raised to 16 years, which effectively reduced the number of job opportunities for young persons. This, in turn, might have prompted some teenagers to refrain from entering the workforce and instead, remain voluntarily in school after reaching age 14.

The increase in unemployment was greatest among young workers. The number of unemployed 14 to 24 year olds rose by 251% between 1930 and 1940. The Fair Labor Standards Act (which prohibited 14-and 15-year-olds from working for manufacturers) effectively limited the job options of the very youngest workers as well.

It would appear though that prior to 1938, there were a lot of unemployed 14 and 15 year olds that were included in the unemployment rate.

That makes the following study even more frightening.

Marginally attached workers - Persons not in the labor force who want and are available for work and who have looked for a job sometime in prior 12 months (or since the end of their last job if they held one within the past 12 months), but were not counted as unemployed because they had not searched for work in the four weeks preceding the survey.


These estimates may be low given what has happened in the economy and the lack of current data. For example, individuals going to colleges and universities have increased dramatically during the current recession/regional depression but are not counted as part of labor market

For more information about the de-facto unemployment rate, contact John Russo at the Center of Working-Class Studies at jbrusso@ysu.edu.

AM here: Kids say the damnedest things don't they?

Good luck going home and explaining to your relatives living in the Matrix that it is a Great Depression ... maybe you can try grounding some red pills into the gravy.

I'll go ask a smartypants about the age 14 thing and let you know in an add-on.

But let's be clear, of course it is a Great Depression.

It is not merely a question of semantics, it matters. How can we the people have any voice to articulate the solution when we are being corn-fed a specious premise?

Lies have consequences.
Posted by Anonymous Monetarist at 9:27 AM