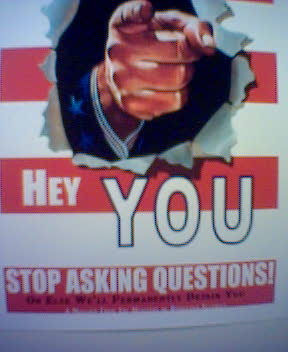 (It was Friday afternoon and was making my way through Times Square. Had not been on the island since they turned Broadway into a pedestrian mall. Sauntering around the tourists in chairs I spied a crawl : ABC News -America back to work, unemployment rate unexpectedly drops to 10%. The thought froze me as the panorama of human pinballs receded ... its' like the Matrix.

No, the Great Deception.

Thank god for my red pills ...

The ridiculously good November NFP is beyond comprehension. It is not supported by ADP data, other private data, ISM data, tax receipts, which still show large declines, retail sales or consumer confidence.

Plus the BLS revised September and October NFP 159k higher!!! Thank you, Ministry of Truth!

ADP, which actually counts jobs, shows a loss of 169k for November. There is now about a 4.6m job discrepancy since January 2008 between ADP’s job count, which shows ~2.8m losses and the BLS, which shows about 1.8 million jobs created…PS - NSA jobs are supposed to pay real taxes; SA jobs do not.

(Mr. King is not including the ~1m announced benchmark revision. -AM)

While the NFP is absurd, what is even more troubling is the number of Street pundits and gurus that proclaim it as ‘real’ or a sign of recovery…

Sanity is not statistical. -George Orwell

The U6 fell to 17.2 from 17.5. Few analysts noted or commented on these factoids from BLS: The number of long-term unemployed (those jobless for 27 weeks and over) rose by 293,000 to 5.9 million. The percentage of unemployed persons jobless for 27 weeks or more increased by 2.7 percentage points to 38.3 percent. Among the marginally attached, there were 861,000 discouraged workers in November, up from 608,000 a year earlier.

So 253,000 workers dropped out of the work force in November.

(Where did you go Joe? A nation bids its unemployed adieu. -AM)

When you have eliminated the impossible, whatever remains, however improbable, must be the truth. -Arthur Conan Doyle

Let’s look at the dilemma of sharply lower income taxes and higher jobs data another way. If the average income in the US is $50k, and the tax rate is 17.38%, each new job should create $8690 of income taxes. If the BLS is correct and 1.17 million more jobs were created the past three months (versus than the same period of 2008), income taxes should be up over $101.6B; but taxes are DOWN $101.5B!!!

The Lord gave, and the Lord hath taken away; blessed be the name of the Lord. -The Book of Job

Trim Tabs: TrimTabs employment analysis, which uses real-time daily income tax deposits from all U.S. taxpayers to compute employment growth, estimated that the U.S. economy shed 255,000 jobs in November. This past month’s results were an improvement of only 10.2% from the 284,000 jobs lost in October…In November, the BLS revised their September and October job losses down a surprising 44.5%, or 203,000 job…

Discover Card: Economic Confidence Plunges; Low Expectations for the Holidays Economic confidence among America's small business owners plummeted in November, as more owners cited serious concerns about cash flow and saw economic conditions for their own businesses getting worse. The Discover Small Business Watch index fell 12 points in November to 76.5 from 88.5 in October.

62 percent of small business owners rate the economy as poor, an increase from 55 percent in October; 30 percent rate it as fair, and 8 percent say it is good or excellent.

Small business generates an estimated 70% of job growth. With small biz owners overwhelmingly gloomy, there won’t be much job growth from them. That is why the IRS data is so gloomy.

In a speech on Friday, Obama called the jobs reports a ‘hopeful sign. We call it ‘fraud’.

Is the unfathomably good NFP report and Obama’s job summit with all the hoopla and hype just a coincidence?

Once is happenstance, twice is coincidence, three times is enemy action. -Ian Fleming

The late Al Sindlinger used to warn that GDP, jobs reports and other economic indicators are manipulated and the best indicator of economic health is consumer income and ‘household liquidity’. And Al asserted that taxes are the best indicator of income, which also correlates tightly to consumer sentiment – on both the economy and politicians.

(Pay the man Shirley. -AM)
Posted by Anonymous Monetarist at 2:00 PM

Thanks for the information and I hope that in future I will get these kind of article.

When the student is ready the teacher will arrive.

Knowledge is just an acquired thing.