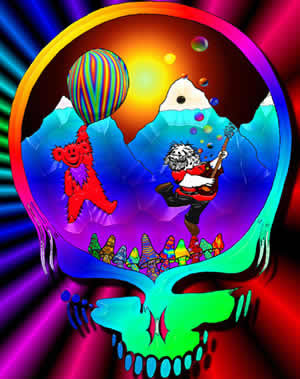 1. A person who uses a free ticket for admittance, accommodation, or entertainment.
2. A vehicle, such as an aircraft, that transports no passengers or freight during a trip.
3. A person regarded as dull-witted or sluggish.
4. A partially submerged log or trunk.

Spirit of the Times: A Chronicle of the Turf in New York City (1841): "The house on Tuesday was filled as far as $300 could fill, barring the 'dead heads.'" Two years later, with regard to a less successful performance, the Knickerbocker, also of New York City, noted "tickets numbered as high as twelve hundred, and not fifty persons in the room?--and half of those 'dead heads.'" Who were these dead heads who lived more than a century before the Grateful Dead played their first note? They were free-loaders--whose heads did not count in the receipts.

No one knows who first invented the word. But it met an evident need for an expression that was both descriptive and sarcastic, to be used by proprietors who got no income from deadheads and by paying guests envious of those who got in free. And soon deadheads were spoken of everywhere, not just in the theaters of New York City. In an 1848 glossary of American words, John Russell Bartlett explained: "Persons who drink at a bar, ride in an omnibus or railroad car, travel in steamboats, or visit the theatre, without charge, are called dead heads. These consist of the engineers, conductors, and laborers on railroads; the keepers of hotels; the editors of newspapers, etc."

The meaning of deadhead as "one who gets something for nothing" was extended before long to include "one who is good for nothing, an idler, a shiftless person." Or, to use another American term of the time, a deadbeat (1863). In the later nineteenth century, deadhead took on the technical meaning of "a trip by train, truck, or other vehicle without cargo or passengers."


AM Here :It was a day at Wrigley in 08 with the brother-in-law. He was describing how he was nibbling on Bank Of America in the 30s and how it was ridiculous that BAC had got down so low.

My reply was that the bank, like all of 'em, was insolvent, but would most probably survive. I offered that the real question would be what would we do after we spend trillions to end up in the same place or worse.

An index that measures the health of the US economy by analysing real-time diesel consumption of trucks has cast doubt on the strength of the economic recovery after recording a sharp decline in January.

The Pulse of Commerce Index was created by Ceridian, which processes electronic card transactions, and the UCLA Anderson School of Management. It receives data every time a commercial driver fills up a truck with diesel, generating a picture of manufacturing and retail traffic.

The index, which launches on Wednesday, has data going back to 1999. Its performance closely tracked rises and falls of gross domestic product. But while the PCI and GDP both rose in the last quarter of 2009, the PCI stalled in January.

The decline in the PCI suggests US economic activity slowed in January after the index fell at an annualised rate of 36.8 per cent.

The new index provides a window into the economic health of the US, said Edward Leamer, chief economist for the PCI and director of the Anderson Business Forecast: “Inter-state freeways that criss-cross the country are the arteries of the US economy and goods that are transported on them are the lifeblood.”

The US economy needed a strong January, said Prof Leamer. “But it just didn’t happen. The economy is a lot softer than the GDP numbers suggest.”

Recoveries from past recessions often have GDP growth nearing 5 per cent, which is why the data from the final quarter of 2009 was received so positively, mainly because it suggested the job market was set to rebound.

But while US unemployment fell slightly dipped from 10 per cent to 9.7 per cent in January, the overall jobs picture has failed to improve significantly. Professor Prof Leamer said the weak performance of the PCI in January supported those forecasting lower rates of GDP growth in 2010.

The movement of lumber from the Pacific north west to California may also provide some early clues about a rebound in commercial construction and housing, which will show up in the PCI, Professor Leamer added. “Goods have to be transported for an economy to grow, so it will be important to monitor this index to see if the economy really is on the move,” said Craig Manson, senior vice-president and index analyst with Ceridian.

AM Here: In hindsight it wasn't just that our solons turned out to be Nancy Capitalists, they also were rather insidiously cynical as they pushed the pablum narrative of the day, be it pre-crisis, or post-crisis.

These folks are like arsonists who push for the bomb-making material and then, after planting the bombs and lighting the fuses, extort the firemen and get a tax on the water.

The 'What Just Happened Crisis' gave us the 'I Can't Believe it's not Capitalism' plan which is now morphing into the Deadhead Economy.

Balancing bubbles with troubles as the economy limps rather than trucks along.

His only hope is if the Chinese dollar denominated asset dumping picks up - the West has no clue as to how combustible a declining Chinese economy is with a leadership afraid of Ma losing in 2012 and looking at using Taiwan unification as a diversion.
Posted by Anonymous Monetarist at 10:49 AM

I have had great time reading your article. It’s actually quiet awesome, it is surprising how you have learn t to write your feelings and thoughts in so precise manner. It's good really. anonymous transactions