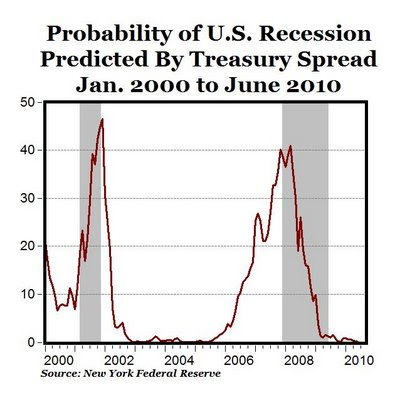 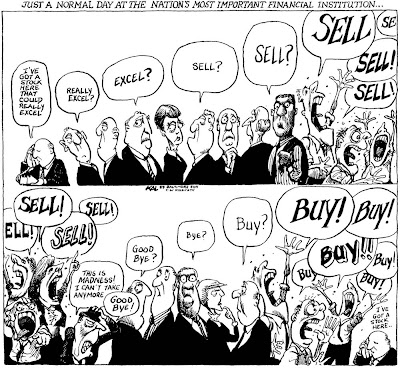 "There may be a recession in stock prices, but not anything in the nature of a crash."
- Irving Fischer, September 1929

"A severe depression like that of 1920-21 is outside the range of probability. We are not facing protracted liquidation."
- Irving Fischer, November 1929

'For years it has been an article of faith with the normal American that America, somehow, was different from the rest of the world. The smash of 1929 did not, of itself, shake this serene conviction... because it was so spectacular and catastrophic, like a shooting star disconnected with the fundamental facts.'
-M.A. Hamilton, In America Today (1932)

'We thought American business was the Rock of Gibraltar. We were the prosperous nation, and nothing could stop us now. A brownstone house was forever. You gave it to your kids and they put marble fronts on it. There was a feeling of continuity. If you made it, it was there forever. Suddenly the big dream exploded. The impact was unbelievable.'
- Yip Harburg, as interviewed by Studs Terkel in Hard Times (1970)

'As mass production has to be accompanied by mass consumption, mass consumption, in turn, implies a distribution of wealth -- not of existing wealth, but of wealth as it is currently produced -- to provide men with buying power equal to the amount of goods and services offered by the nations economic machinery. Instead of achieving that kind of distribution, a giant suction pump had by 1929-30 drawn into a few hands an increasing portion of currently produced wealth. This served them as capital accumulations. But by taking purchasing power out of the hands of mass consumers, the savers denied to themselves the kind of effective demand for their products that would justify a reinvestment of their capital accumulations in new plants. In consequence, as in a poker game where the chips were concentrated in fewer and fewer hands, the other fellows could stay in the game only by borrowing. When their credit ran out, the game stopped.That is what happened to us in the twenties. We sustained high levels of employment in that period with the aid of an exceptional expansion of debt outside of the banking system. The time came when there were no more poker chips to be loaned on credit. Unemployment further decreased the consumption of goods, which further increased unemployment, thus closing the circle in a continuing decline of prices.This then, was my reading of what brought on the depression.'
-Marriner S. Eccles

'Other than Herbert Hoover’s memoirs, I have yet to read any analysis of the Great Depression attribute anything internationally other than the infamous US Smoot-Hawley Act setting in motion the age of protectionism in June 1930. It was the financial war between European nations attacking each other's bond markets openly shorting them that led to all of Europe defaulting on their debt. Even Britain went into a moratorium suspending debt payments. This is what put the pressure on capital flows sending waves of capital to the United States that to some degree was kind of like the capital flow to Japan into 1989. This put tremendous pressure upon the dollar driving it to new record highs that were misread by the politicians who did not understand capital flow. They responded with Smoot-Hawley misreading the entire set of facts.'
-Martin Armstrong

'The euro is now, for the first time since its introduction, in a difficult situation, but it will come through. Now, to some extent, there is speculation against countries ... this development combined with an unfavorable starting position and unsolved structural problems. That is dangerous."
-Angela Merkel

'The big bets are emerging amid gatherings such as an exclusive "idea dinner" earlier this month that included hedge-fund titans SAC Capital Advisors LP and Soros Fund Management LLC. During the dinner, hosted by a boutique investment bank at a private townhouse in Manhattan, a small group of all-star hedge-fund managers argued that the euro is likely to fall to "parity"—or equal on an exchange basis—with the dollar. "This is an opportunity...to make a lot of money," says Hans Hufschmid, a former senior Salomon Brothers executive.'
-WSJ

Have always held firm to the thesis that deflation is the midwife to hyperinflation. A real deflation, not just disinflation, requires liquidity evaporation due to multiple sovereign crises, where the backstop is called into question.

The debate is not inflation versus deflation it is debasement versus deflation. Your money Mr. Federales has no velocity here for the band of The Hand can only conjure a Potemkin demand. Organic wage growth, absent for the last decade, comes from ... wait for it ... the productive allocation of capital when a free market pins winners and chooses losers. (AM Rule #8)

(Dan Henniger, WSJ op-ed) :Finally, after a nonstop, nearly 80-year upward climb, government spending has hit a wall. It didn't seem possible but this is a big wall. It's the American voter. This has been an unforgettable year in the history of American spending… We've been grinding toward this moment since 1932. It has always been a question of political physics just how high government could go in the U.S. before it arched over and down.

AM here: Our current situation and prognosis : If inflation expectations are unanchored, then a severe recession can lead to a deflationary spiral. The logic is as follows: In the early stage of recession, the emergence of slack causes the inflation rate to dip. The resulting lower inflation rate prompts people to reduce their future inflation expectations. Continued economic slack causes the inflation rate to fall still further. If the recession is severe and long enough, this process eventually will cause prices to fall and then spiral lower and lower, resulting in ever-faster deflation rates. The deflation rate stabilizes only when slack is eliminated. And inflation turns positive again only after a sustained period of tight labor markets.

The second model is one where inflation expectations are "well anchored" in the sense that they are consistent with the goals and policies of the central bank. In this case, even in a severe recession, people expect the central bank to take policy actions, it is of course at all times just a confidence game, that will restore a positive rate of inflation, and this expectation acts as a magnet pulling prices up. Although deflation will occur if the extent of slack is sufficiently large, a deflationary spiral only develops in the direst circumstances in which monetary policy is incapable of righting the economy.

The first model says you believe your lyin' eyes.

The second model says you believe in wizards.

Such magicians they are with models they built that show no chance of fail when the money is easy and free. It is merely a matter of scale not design. These models rate the probability as 100% that our blessed leaders can manufacture the economic consent of consumers by getting them to add more debt because same consumer will believe that prices will be higher in the future.

These models and the besotted following are both trading without respect to fundamentals.

Inflation expectations were well anchored in the Great Depression.

They also were well anchored in Japan which is presumably the Federales highest probability target ... flat beer for everyone.

If you believe in the adage 'as above, so below', then one might suggest that the real damage yet to come will be caused by the Federales pushing the pedal again too hard. The rubber band pulled up snaps back, its' pulled harder up and snaps back even harder and then paging ... Dr. Faber, Dr. Grant, Dr. Faber.

What we need is a Holden Caulfield to scratch, 'it is a consumer in debt stupid', on each computer terminal housing such models.

Merrily, we rhyme along.
Posted by Anonymous Monetarist at 10:04 AM

The symptoms of our massive collective dissociation point to the underlying and incurable malady. Our reigning economic paradigm of capitalism is in its inevitable death throes. While the economic doctors engage in the extraordinary mechanisms of resuscitation and artificial life support, our social managers are attending the nervous and yet hopeful relatives in the waiting room with reassuring prognoses of imminent recovery. Interesting side notes: 65% of all bankruptcies are due to insupportable medical expenses. 75% of those cases involve persons with health insurance coverage. 90% of health insurance expenditures are incurred in the final six months of life. I find such reflections on our individual health "care" an uncanny and appropriate parallel of our moribund economic state.

Not sure if our current system bears much resemblance to the capitalism that this fellow was taught about as a pup...

Comparing our economic state to a patient on life support is certainly appropriate.

It is most disturbing that America is one of the only countries in the industrialized world that allows 'drug' advertising.

'Ask your doctor about..' always makes me cringe.

Personally, I think Corporatism is Feudalism with a set of sweet rims, a spoiler and big 'ol fat farty tailpipe.