The Anonymous Monetarist Round Table : Believe what your Eyes see 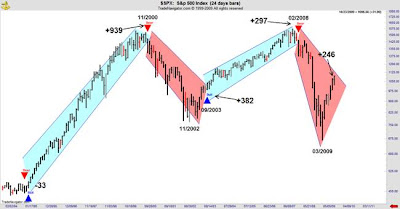 On August 24th, 1987, there was a major planetary convergence that coincided with a major top in the stock market. I am not an astrologer but I recall the convergence well because it was well publicized in such mainstream publications as Time.

When the worst crash since 1929 occurred less than two months later, many saw it as a sign. There was a sense amongst many that the crash was the sign of a second great depression to follow.

According to Jose Arguelles interpretation of Mayan cosmology, the August 1987 date defined the end of 22 cycles of 52 years each or 1,144 years total and the Harmonic Convergence of 1987 also began the final 26 year countdown to the end of the Mayan Long Count in 2012 where a new 5,125 year cycle would begin.

What has all this got to do with the stock market today? Not much perhaps except as offered previously, in the fall of 1987 there was a correction that mirrored the shape of the correction 5 to 6 months before and I recall well at the time that the overwhelming majority of market participants at the time believed that another bullish correction that mimicked the last correction was playing out. In fact, in early October of 1987 prior to the crash, the largest point rally in history occurred (to that point in time). There was no follow through. Many traders, awaiting for that sign of strength to reappear continued to greet weakness as an opportunity---until the Mother Of All Weakness swept over them on October 19th, 1987. The crash began 49 calendar days from the August high and ran through the 55th day from high, a period Gann referred to as the Death Zone. This is the same pattern that played out in 1929 with the crash beginning 49 days (7 squared) from high and running through the 55th day.

It is worth considering that waterfall declines don’t occur from highs, they occur from a lower high. They occur after a reflex rally, after a backtest of resistance.

Stocks: Even if a rally through 1104-1105 were to occur, we do not believe that would change the big picture outlook as described in our January “Year Ahead” piece. We continue to believe that a challenge of the January high would result in more numerous and more important negative divergences than those that already exist. It would be a condition not unlike the divergences that appeared in October 2007 as the market penetrated the July 2007 high.


AM here: The 24 trading day chart above shows the Danielcode monthly trend indicator that per Mr. Needham is'a proprietary but unsophisticated mix of largely traditional market studies. In this chart we can see a whipsaw in the trend in 1994; thereafter it stayed on a buy signal (blue) until November 2000; switched to a Sell signal at that time and remained on the bear side until September 2003. From there it signalled a resumption of the bull market until February 2008, when it again alerted us to the impending bear market about 90 days after the market top in October. The notable feature of this chart (24 trading days is a Danielcode “month) is the stability in its signals. The indicator showed one dominant trend for long periods of time, with no whipsawing since December 1994.On the 12 day chart (also shown above-AM)we now get some whipsawing in the signals for the 2002-2007 Bull market, but precious few considering the time span, and the regression channels are barely changed.'

It would be considered a ‘done deal’ or a high probability that World Markets will Crash again during 2010. The point of greatest exactitude of the general ‘meanness’ will show itself in late July and early August. During that period Mars will conjoin Saturn, both opposing Jupiter conjoining Uranus (you can joke all you want, but THIS is no laughing matter). Pluto will form a square angle to all four, making a T-Square pattern of extreme animosity.

The dichotomy arises from the Bradley Model showing the Crash period as down from March and culminating with this configuration. On the other hand, our Mars/Uranus Crash Cycle portion of their synodic period, which has contained Every Crash for the last 100 years, bodes the Crash period AFTER the completion of the massive alignment.

We will do everything but guarantee you that stocks will crash worldwide within three months of August first (that is between May 1 and November 1). It is expected that technical market analysis of data generated by current market action will assist in pinpointing most danger/opportunity as critical moments approach.
Posted by Anonymous Monetarist at 9:43 AM

I-Man eats this stuff up. The planetary alignments are something I plan on digging way deeper into, from both a socionomic and a trading standpoint.

I see you follow Armstrong as well, interested in your thoughts on this monthly chart I did recently.

I included MA's 1987 projection line, because it appears to be in play as resistance now.

some of us are wondering how cooper came up with 49 days from Jan 11 to Feb 18.. thanks if you can clarify that!

Good catch!
Will send him an email.

Actually no need to ask, he just posted a correction a few moments ago on Minyanville Buzz&Banter

'Today is the 39th calender day from January 11th, a period that marks a lower high, from which the waterfall begins and accelerates and finds a waterfall low into the 49th to 55 day from the high.

Currently that equates to the first week of March.

My fuzzy memory does recall the Armstrong .pdf you are referring to where he drew out his projection line.

What was salient, at least for me since it corresponds with a long held belief, is if we cross the deflationary Rubicon a hyper inflationary episode may be ushered in.

Do not pretend to know what that level is but firmly ascribe to Armstrong's pendulum analogy which is also articulated by Gann's students as 'as above, so below.'

The curious case of Martin Armstrong, to this humble blogger, is disconcerting on many levels.

Judges altering transcripts with impunity? What a chilling proposition.