Human sacrifice, dogs and cats living together, mass hysteria and Greenspan as an intemperate, disregarded blogger... 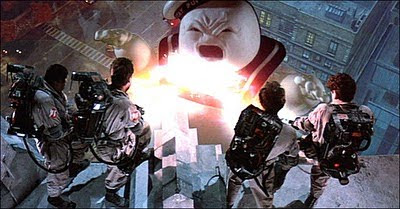 'Ask yourself whether the dream of heaven and greatness should be waiting for us in our graves - or whether it should be ours here and now and on this earth.'
-Ayn Rand

'In retrospect, I see nothing that we did that was inappropriate in terms of policy. I do not deny that many appear to have succeeded in a material way by cutting corners and by manipulating associates, both in their professional and in their personal lives. The fact that our economical models at The Fed, the best in the world, have been wrong for fourteen straight quarters, does not mean they will not be right in the fifteenth quarter. History has not dealt kindly with the aftermath of protracted periods of low risk premiums. I guess I should warn you, if I turn out to be particularly clear, you've probably misunderstood what I've said. The true measure of a career is to be able to be content, even proud, that you succeeded through your own endeavors without leaving a trail of casualties in your wake.'
-Alan Greenspan (compilation)

Cross-referencing Jimmy 'Zip-a-dee-doo-dah' Grant : 'Loans and leases were flattish in the opening months of the recoveries from the recessions of 1981-1982, 1991 and 2001, but in no case was there weakness on the scale of today's. There is a risk too, that debt destruction, or de-leveraging, might get rolling again, crushing jobs and incomes as it proceeds. There has only been one sustained de-leveraging since the 1920s.'

Hmmmm, any nuggets from Bill 'Red Pill' King? King Report:' The Commerce Department reported on Wednesday that new home sales dropped 11.2% in January to 309k units (360k was expected). This is the lowest level on record, which goes back to 1963.'

Ah no worries blame it on the snow... Anything else?

Yesterday's WSJ, Professor Robert Barro, 'viewed over five years, the fiscal stimulus package is a way to get an extra $600 billion of public spending at the cost of $900 billion in private expenditure. This is a bad deal.'

Guess zero hour has passed but heck he's from Hahvahd. Elitist smartypants, don't he know that stupidity is cupidity here on Sugar Mountain?

Bloomberg:
'Former Federal Reserve Chairman Alan Greenspan said the financial crisis was “by far” the worst in history and called the recovery from the global recession “extremely unbalanced.”

The world economy has undergone “by far the greatest financial crisis globally ever,” Greenspan said today in a speech to the Credit Union National Association’s Governmental Affairs Conference in Washington.

Greenspan said that while the economy was in worse shape in the Great Depression, the recent financial crisis was potentially more harmful than that in the 1930s.

Greenspan said he wants the subprime mortgage market to return. I hope we can find a way of resurrecting the subprime market," because it was working well until those mortgages were widely securitized.'

'LOL, no, he didn't really, did he??? You gotta be kidding me... He is just stunning in his arrogance... It(the world economy has undergone by far the greatest financial crisis globally ever)has, and he caused it, period.'

What he said. Mr. Greenspan please tear down your wail and go away.
Posted by Anonymous Monetarist at 9:36 AM

I have your RSS feed on my main page now (at my new wordpress location).

Keep up the great work.

You are very kind.

I got a kick out of yours too.

I was going to send an email but you are TRULY the anonymous monetarist!

Thanks for stopping by. Keep up the great writing. I'm linking you in the EarthBlog News tonight.

Anonymity is a warm blanket :)

Do you know of a reputable dealer of precious metals in Chicago who will not scalp you?

Would suggest you look at Fleck's site, he's a stand-up fella, search the archives, and ask a question if need be ... he'll answer.

RPD....
Not Chicago, but I've had very good experience with golddealer.com
Check them out. They give you their buy and sell prices at all times.

"and so it goes" -Kurt Vonnegut-

Just want to mention that this blog will never be advertiser supported nor offer any recommendations for commercial purposes.

However comments by readers that are not obvious solicitations will be allowed.

Please do your own research and examine everything with the eye of a skeptical empiricist.

one. I have booked marked your site and am about to email it to a few

friends of mine that I know would enjoy reading..
World of Warcraft