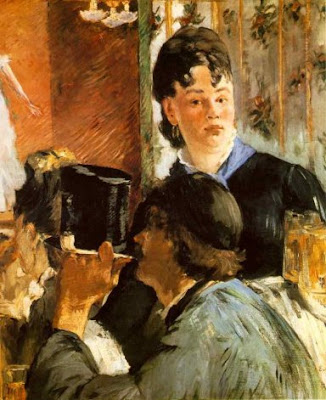 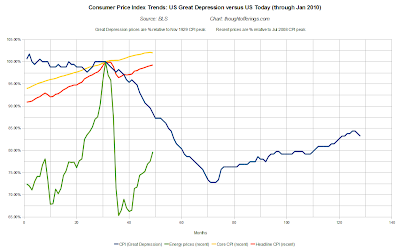 'Oh, to live on Sugar Mountain
With the barkers and the colored balloons,
Though you're thinking that
you're leaving there too soon'
-Neil Young

'Fractional-reserve banking systems are historically prone to runs and deflationary contraction. Paper-money systems are inherently prone to inflation. Our modern financiers have devised a paper-money-cum-fractional-reserve-banking-system(with yet another credit structure, also highly leveraged, lurking in the shadows) that is prone to inflation and deflation at one and the same time. The greatest generation? In devising infernal financial machines, we're the one.'
-James Grant

On Friday, the usual suspects heralded the great CPI and the negative Core CPI. Headlines proclaimed that Core CPI was negative for the first time since 1982. This is a totally invalid, if not ignorant, statement because CPI methodology has been altered something like 10 times since 1982.

And if one actually believes the Core CPI is a valid metric, the return of deflation, after the trillions of dollars in stimulus, credit creation, nationalization, etc. should scare the CNBC out of you.

But we digress. Once again the CPI methodology has been changed. In fact, there are two changes to the January CPI. The BLS has changed its seasonal adjustments and the BLS has increased the weighting again of OER by including secondary home ownership in the metric.

For the vast majority of Americans, there is no cash benefit for falling housing prices in the CPI. The BLS has increased the weighting of housing, probably because housing prices are in retreat. Your home price can fall while you pay more for the necessities of life and the Ministry of Truth will tell you that prices are going down even though your checkbook says the opposite. And Street Shills will yell ‘hallelujah’ and implore the Fed to pump more credit.

But wait, there’s more chicanery. Second home ownership is listed as ‘unsampled’. If we understand the English language correctly, this means the BLS does not sample to procure the particular data. Logic dictates that if one does not sample, then they are manufacturing the data by guessing.

(Guessing is such an innocuous term for widespread manipulation.-AM)

How else did the BLS craft a benign CPI when PPI jumped 1.4% in January? Somehow the BLS got electricity prices falling 1.1% despite record snow storms and severely cold weather. All other energy prices soared. The BLS has the price of electricity and natural gas (energy services) declining 4.7% NSA over the past 12 months.

We have maintained for years that CPI is constructed to NOT show inflation because: 1) It is used for COLAs, 2) It fosters the overstating of GDP, and 3) Provides cover for the Fed to paper over declining US living standards. CPI minus PPI shows PPI is at its largest gap (1.20) to CPI since 1980.

(See graph above from Thoughtofferings.com, link is to the right. -AM)

And there are other changes to CPI. Medical care commodities, because they are inflating, will also have ‘unsampled’ factors in their compilations.

The BLS has healthcare costs up only 3.4% for 2009. This is a way to keep inflationary expectations well anchored. More proof of CPI fraud and the scheme to understate inflation is the weighting of ‘medical care’ in CPI. Healthcare spending is estimated to be 17.6% of GDP in 2009 per the Kaiser Family Foundation. So what weighting does the Ministry of Truth assign to ‘medical care’ in CPI? 6.513% BLS will say its estimate is out-of-pocket expense. But someone, the government or business, pays the balance. And those costs are passed on to someone.

AM Here: As posted on this blog on November 25, 2008 -' Remember the movie, 'It's a mad,mad,mad, mad, mad world'? At the end of the movie that generation's inglorious bastards were all gripping a fire ladder as the motor blew up and the ladder lurched viciously throwing them 'akimbo'. The vicious movements from left (inflation) to right (deflation) best mirror our market action.We are at the cusp of being at the most volatile period (per volatility indexes) ever. As in ever since we've had a stock market. This volatility is mostly driven by shifting perceptions of inflation and deflation. The compression of time frames within which this inflation/deflation switch gets flipped on and off can only result in one name for our current economic malaise : Indeflation.'

The indeflation special is still a top seller at the Red Pill Diner. This struggle 'tween virtue and vice is writ large as the debate between deflationistas and debasionistas. Ones' lens depends on what one means by ones' ends. The deflationistias mean that deflation is the midwife of hyperinflation. The debasionistas mean that America's resilient wealth exporting machine will import higher asset values. The former pines for reason before farce, the latter embraces the tragedy.

Never have so many been so confident of so little (flat at best) done with so much (trillions of meatballs.)

The Unbearable Brightness of Doing Nothing is your humble blogger's call.

AM Rule #6,'The cold hard fact of our age is that the bankrupt ideology of the rich that had greatly succeeded in drafting the inner monologue of regular folks so that they would vote against their self-interests is colliding head-on with a Mr. Market that is a bit pissed off that we've inflated it out of the business cycle for the last quarter century', or the 'What just Happened Crisis', has given us Rule #7, 'Failure to liquidate the insolvent banksters has led to the liquidation of a large part of the productive economy. A taxpayer financed bailout of rich folks' bad speculative bets has resulted in zombie banks and zombie customers... a fiscal tide that lifts no boats', 'The I Can't Believe it's not Capitalism' plan.

We're kicking the 'creative destruction' can down the road trying to avoid the Deadhead Economy on the other side of Sugar Mountain. We are fighting a war with the future using the armaments of the past.
Posted by Anonymous Monetarist at 10:01 AM