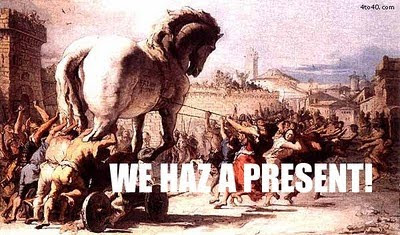 Let me get this straight...

The country of Greece, where a third of the economy is underground, where over the last 175 years the country has been in default about half the time, will now be monitored by the EU to insure that all future government statistics are accurate, will give the EU the power to audit its' books, and will have to follow the austerity measures laid out by the EU?

Are you kidding me?

There is no chance in Hellenic that Germany will support anything other than a Potemkin bailout.

Oh and might you suppose that the EU, once follow up reports from Greece show that there are -harumph- still ongoing 'discrepancies', will fine Greece for its' transgressions?

Other EU members probably won't be too terribly willing to gnaw at the horsehair holding the Damocles sword dangling above them also.

The canaries are chirping this morning as Dubai CDS, measured by bps, explode by over 17%.

And the dominoes are being set up as witnessed by the Spanish consortium scurrying to London to meet with its' 'bondholders'.

As mentioned on this blog in December of 2008 :

'A bank holiday where the Federales liquidate insolvent banks' capital structures (with the burden of proving solvency emphasized) per a crazy concept called price discovery is in the national security interest of the United States.

Fiscal initiatives that mandate and hold steadfast to the goal of increasing incomes on a generational basis are the greatest challenge in front of us.

Although it grieves me to say it, both given the implications for human suffering and the rapscallions throughout history that have parroted such a view but ... sometimes to solve a problem you have to make it a bigger problem.

If we can accomplish the Houidini-esque stunt of funding this debt at manageable levels it will only be by literally defining AAA as anything American (i.e. if America becomes AA then literally AA is the new AAA, with the assumption that the reasons for our 'downgrade' would serve as deleterious to all others, except maybe Mr. Gold.)'

I believe this vision is playing out. We are the last canary, and the biggest domino. But given the magic of our reserve currency, our 'downgrade' will only occur within the context of the world being downgraded first.

I've always held firm to the thesis that deflation is the midwife to hyperinflation. A real deflation, not just disinflation, requires liquidity evaporation due to multiple sovereign crises, where the backstop is called into question.

Beware the Trojan Hoax.
Posted by Anonymous Monetarist at 8:59 AM

The net effect of hyperinflation in political terms is abdication. Unless you foresee a gangsta regime a la Mugabe, I think you can be sure the oligarchs (whose assets are overwhelmingly financial) will opt for the less bitter pill of deflation.

Would beg to disagree as follows:

Deflation is the hemlock of the elites. The Oracle at Eccles has made clear that today's malinvestment cannot and will not result in prices falling.

The solons do not, obviously, desire hyperinflation but rather the gentle lubrication of gradual debasement.

The point is that the random-walk coin flip may be superseded by the Mandelbrotian flight of the arrow.

To be mindful is a discontinuous process.

So as suggested, the quantity of liquidity evaporation will very much define the quality of any hyper-inflation.

As above, so below and vice-versa...

I had to look up "Potemkin", props to AM for prodding me to greater literacy.

One thing you may have not figured in is a massive repudiation of US government policy by it's constituents. When the game gets rigged past a certain point, people stop playing.

The elites may have overplayed their hand, assuming they are bright enough to have been playing and not just "muddling along" (I'm not so sure they have a handle on it).

If a massive repudiation occurs and let us just suppose say a third party is voted in, then it will be a new day, we'll all turn a page, we'll start afresh, and then... we'll probably do the same flippin' thing all over again.

One aspect of this country of course is our creativity -why I question how China can surpass us when they file per capita less patent apps then any major country. A rigged game generally (and historically) motivates mimicry as I suggested in the 'synarchy for all' post.

Considering that all third party movements get sucked into the big 2, and as enticing as a 'revolution' sounds well ... at the end of the day you go home from the dance with who ya brought.

We're stuck in a moment and we can't get out of it until to quote Lennon, 'time wounds all heels'.

The 'well-heeled' in charge will play prevent defense for as long as they possibly can. When the next team gets on the field, regardless of what the plays look like the playbook will not be much different.

I think that perhaps if a third party isn't voted in (which would logically be a centrist, mildly libertarian party), there will be a defacto return of power to the state and local governments, as the central government will fail to be able to deliver goods and services.

In the long run, either will be best (and one or the other is inevitable IMO), although the first is preferable, as imported goods will continue to be available...

Well consider that if all faith is lost in the Federales, it is unlikely that the states would fill the credibility vacuum.

That's akin to an abused spouse taking up with her husband's twin... most likely the end result would be similar.

What is of greater concern is that if all faith is lost in the public sector, a byproduct of true deflation, then from a forward-looking perspective, only private sector assets would be seen as a store of value relative to a dramatic reduction in the scrip's purchasing power.

That would set the stage for a hyperinflationary episode ... a truly ghastly scenario.