Where did you go Joe? A nation bids its unemployed adieu in this Great Depression 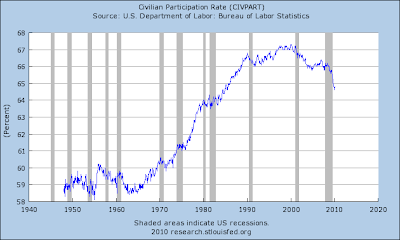 'Although he may not always recognize his bondage, modern man lives under a tyranny of numbers.'
-Nicholas Eberstadt

'There was a young man from Trinity,
Who solved the square root of infinity.
While counting the digits,
He was seized by the fidgets,
Dropped science, and took up divinity.'
-Unknown Author

The Ancients used mathematics in order to try and understand the world around them.

Us Moderns use it to obfuscate.

First, let's agree on the basics.

Now, let's break down the numbers from when this secular bear started in 2000 to the February 2010 report (data from http://www.bls.gov/web/cpseea1.pdf):

13 million people, over the last decade, have neither jobs nor any desire to look for one?

That's greater than the total increase of the civilian labor force!

But the boomer generation(and by the way what are we going to call the next one? the 'buster' generation?), those 74 million from 1946 to 1964, they ain't retiring en masse yet...

Oh golly I guess they are all going back to school to learn new skills for the global economy. But wait... according to the 2000 census there were 76.6 million students enrolled in schools from kindergarten on. Out of this total 17.5 million were enrolled in post-secondary (college including graduate school.) Assuming the 2010 census doesn't report that an epidemic of forty and fifty somethings are joining the beer-bonging caste that is today's 'enseignement supérieur' in an entirely stealth fashion, 'going to school' seems to be a specious explanation...

Where did you go Joe? A nation bids its unemployed adieu in this Great Depression.

The Northern Trust stated on January 10,2006 in its' report, Noteworthy Aspects About the Participation Rate (2000-2005),'there is no conclusive research explaining the reasons for the downward trend.'...

Or as Alice said when stuck in the rabbit's room 'there's no room for me to grow up anymore here.'
Posted by Anonymous Monetarist at 9:34 AM

You should go Hollywood with this stuff Money ...

Although, must admit, would be fun to sneak up on Sarah in some Oscar gift suite and ask her , 'How's that dopey, derangey, think working out?'

BTW, you rock, extensively I might add, but what's the point? How many observers does it take to correctly determine that yes, the Titantic is going down?

One can cut the numbers any which way they choose, and in your particular case, add some distinctive value, yet the same conclusions are reached time & time again.

You raise both a valid point and question.

For my part, this blog is a scrapbook, as well as a platform to develop my own understanding of 'things'.

Beyond that I have several young children... with 'understanding' also comes a realization as to not only how treacherous our current path is but also the determination to see that they will be able to not just survive but prosper.

Beyond that, well, sharing is caring.

Those that fail to stand for something will fall for anything.

agreed you do rock, MONEY! love your stuff.

wonder if this bear photo doesn't fit you to a T. mellow t†t†

...(I'd be pleased if you exchange reciprocal link with me.)
forex chart analysis and a cat

Will check in with you from time to time.

Congrats for putting yourself 'out there.'

Are you a cyclist?

Intend to take that up seriously some day when running blows my knees out :)

He stated awhile back that one should create a filing system to organize info, for he found from personal experience that without a 'system', building a knowledge base was extremely challenging because it was so easy to forget what you had read.

That was one of the catalysts for this blog. A scrapbook where the google function is the 'gofer'.

Alas, am limited to that approach because of concern in hearing, 'Mommy, why is Daddy slurring?'

money, let me put it this way: when you do blow out your knees (not if but when) the rehab will be on a bike. i did the ironman ONCE and that was enough. cycling = reborner's. i always have two wheels between my legs. ok your going to love my line of work. check it out. maybe i can send you a sample from colorado. http://www.woodycreekcellars.com/
ciao

Thanks for the link.

Do love your line of work and envy the beautiful views that no doubt you have come accustomed to.

Concerning injury, it is the top of the list of my personal paranoias, knock on pavement have never suffered one.

One poignant observation on a run that I just came back from...

The viaduct under the Kennedy Expressway on Damen was packed with homeless. Have never seen it so bad in all my years here in the Great City. A sad non-Bubblevision viewpoint on this V-shaped, scratch that, nascent, scratch that, oxymoronic jobless recovery.