Phat, Plummed and Cupid is no way to go through strife son 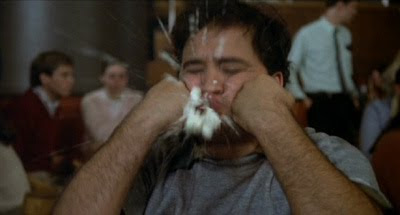 AM here : Zero point Zero? Oh ye quivering throngs of bullisht Nancy Capitalists with liquidity chalices extended, thou doth proclaim that we can bypass the consumer, mayhaps even bypass the small businessperson, but verily can we also bypass reason?

The Demand Restoration Project is not working yet. Your money Mr. Federales has no velocity here for the band of The Hand can only conjure a Potemkin demand. Organic wage growth, absent for the last decade, comes from ... wait for it ... the productive allocation of capital when a free market pins winners and chooses losers. (AM Rule #8)

Phat, Plummed and Cupid is no way to go through strife son.

Failure to liquidate the insolvent banksters has led to the liquidation of a large part of the productive economy.A taxpayer financed bailout of rich folks' bad speculative bets has resulted in zombie banks and zombie customers... a fiscal tide that lifts no boats. (AM Rule #7)

Barry, as one Chicago liberal to another, here's a suggestion. Screw health reform, what we need is wealth reform. Loading up the banks with a trillion meatballs is nothing more than DIP financing for a generational workout. A year after the Devil's Peek (S&P 666) and the banksters are still too bloody bankrupt to go broke? Top-down crisis management has resulted in an obese obscenity poised on a flagpole in a windstorm. And make no mistake Mr. Dunham, it is always brightest before dusk ... the storm is approaching.

The cold hard fact of our age is that the bankrupt ideology of the rich that had greatly succeeded in drafting the inner monologue of regular folks so that they would vote against their self-interests is colliding head-on with a Mr. Market that is a bit pissed off that we've inflated it out of the business cycle for the last quarter century. (AM Rule #6)

Either you're a hero Barry or its' generation zero...

President Obama and Democrats launched a campaign to vilify insurance companies in the final stretch of their health reform effort.

Republicans, meanwhile, pointed out that those very same insurance companies would get huge checks from the government if health reform is enacted.

“(Health Insurers) will keep on doing this for as long as they can get away with it. This is no secret,” the president said. “They're telling their investors this – ‘We are in the money. We are going to keep on making big profits even though a lot of folks are going to be put under hardship,’” the President told supporters at a stop in Pennsylvania today.

Neither mentioned that the Senate health reform bill, which is the basis for Democrats' last best chance at comprehensive reform, would give the insurance companies millions of new customers required by law to buy health insurance. It would also require insurers to cover everyone, regardless of age, gender or pre-existing condition.

To help pay for the new insurance requirements the government would give to people money to buy insurance - $336 billion over the next ten years. That money, ultimately, would have to go to... drum roll... insurance companies.

AM here: The bold pap of a road map exchanged for the insouciance of elites and the Antoinette economy.

And soon coming to the pablum narrative near you, the oft-proclaimed 'counterproductive' populism that will stall the V-Shaped, scratch that, nascent, scratch that, oxymoronic jobless recovery.

Exhibit thyself to a public that may hiss thee, bemoan the solons. Let them eat debt!

Don't Task Don't Smell, the central plank of the 'I Can't Believe it's Not Capitalism Plan' has given us Sugar Mountain, where stupidity is cupidity.

Buckle up citizens, the Deadhead Economy awaits on the other side of this black diamond demographic slope.

On the bright side, 2017-2018 will be a once-in-a-generation opportunity for the value investor!
Posted by Anonymous Monetarist at 8:47 AM

Could you do a post laying out your "AM Rules"?