Less Bad is Good until Less Good is Bad or as Barnum would opine...Snap!... you've been had 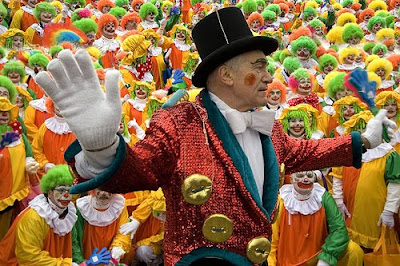 'Hit the engine
but she ain't turnin'.
We're the same sad story
that's a fact
One step up and two steps back.'
-Bruce Springsteen

'Better read it first, for if one drinks much from a bottle marked "Poison", it's almost certain to disagree with one sooner or later.'
-Alice

'Like strength is felt from hope and from despair.'
-Homer (not Simpson folks!)

'The Black Swan is a sucker's problem.'
-Nassim Taleb

Addition through subtraction is a solution that ignores the problem.

Once upon a time, a nationally known smartypants on an island told me that THEY would keep the bulls and bears off balance as THEY went from room to room in the burning building putting out fires.

That is what the code word 'trading range' really means.

Analysts opining that we all will be 'surprised by the market's strength' is code for the Federales winning, i.e., these folks are embracing the tragedy.

Analysts that suggest a 'crash is inevitable' are pining for reason before farce.

Hobbes first law of nature is that every man ought to endeavour peace, as far as he has hope of obtaining it; and when he cannot obtain it, that he may seek and use all helps and advantages of war.

The dollar is the bullet, the Fed is the weapon. The key to the gun cabinet is for Members Only.

We speak of a mild outcome to all this, a new normal, as we stuff the pig on the scale of fate. We are so far down the rabbit hole Alice, so arse over tit, that it is quite plausible that the power law being applied here is masquerading mild as wild as well as its' converse.

What if the mild prognostication is deflation or hyperinflation with either A cascading to B or B cascading to A?

What if the Black Swan is just, hope upon hope, muddling through?
Posted by Anonymous Monetarist at 9:03 AM

The dollar is the bullet, the Fed is the weapon. The key to the gun cabinet is for Members Only.

money, i am going to be perfectly blunt in this dumb down. on ZH i see comments that say i'm in PM's or pm. what does PM mean?

They can only take from us what we abrogate; they can only lie to us if we refuse to put in the work to know the truth.

Financial intelligence is the key.