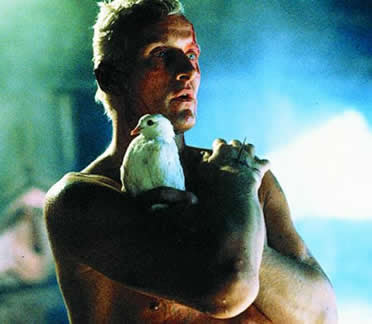 'Proud of yourself, little man? Not very sporting to fire on an unarmed opponent. I thought you were supposed to be good. Aren't you the "good" man? C'mon ..... Show me what you're made of.'
-Batty

'In every case consumer protection has the edge and will trump safety and soundness and I think that is backwards' said John Dugan, comptroller of the currency,{the bill uses} insufficiently 'preemption', the mechanism where federal regulators overrule state counterparts. Andrew Pincus, a lawyer who has advised the US Chamber of Commerce, argued this week that small business would face a 'significant diminution of credit' if the Dodd bill is made law.

The Dodd bill, whatever watered-down, beaten-down, version makes it through the captured sausage grinder, most certainly does pose systemic risk. The risk that a credit card application or bill or a mortgage application or statement or any other consumer finance product might, horror upon horror, be written in plain English and be comprised of one or two descriptive pages as opposed to twenty or thirty. A risk to a system held far apart from the system you reside in gentle reader.

What oh what will the banksters do if they are forced to engage in a simple, and shudder, transparent transaction! Why the walls of Jericho would fall upon the cursed consumer!

Analogously what would the banksters and other motley corporate structures do if they weren't allowed to run two sets of books like the Cosa Nostra? What would happen to our fragile nascent recovery if the Oracle of Eccles is not divined as the capo di tutti capi?

The cafones and poveretts, for whom the books are always closed have been told 'col tempo la foglia digelso diventa seta'.

Trust us but don't task us lest you see trust in us lost to your peril, whine the custodes.

WIKI: After his arrest, the mafioso Giovanni Brusca described the ceremony in which he was formally made a full member of Cosa Nostra. In 1976 he was invited to a "banquet" at a country house. He was brought into a room where several mafiosi were sitting around a table upon which sat a pistol, a dagger and an image of a saint. They questioned his commitment and his feelings regarding criminality and murder (despite his already having a history of such acts). When he affirmed himself, Salvatore Riina, then the most powerful boss of Cosa Nostra, took a needle and pricked Brusca's finger. Brusca smeared his blood on the image of the saint, which he held in his cupped hands as Riina set it alight. As Brusca juggled the burning image in his hands, Riina said to him: "If you betray Cosa Nostra, your flesh will burn like this saint."

AM here : The light that burns twice as bright burns for half as long. And Indy, per every real world statistic that you can empirically squeeze out of the pablum narrative toothpaste, it doth appear that the fire is going out.
Posted by Anonymous Monetarist at 10:06 AM