Toil and trouble, a bullisht bubble, the cops at the door? Hey, hey, stock's goin' double! 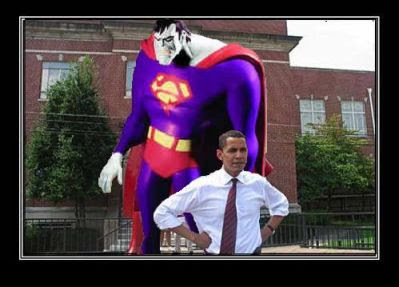 And if you argue with that they question your patriotism.

That was my favorite little ditty for the Bush administration. As the pablum narrative trumpets the madness of cowards (i.e. Nancy Capitalists that socialize the downside and piratize the upside), your humble blogger wonders exactly where did we jump the shark?

Nixon & Carter were certainly bizarre in their own respects but the Reagan administration really seemed to get the bizarro universe ball rolling. Remember Ollie North being willing to do a G. Gordon Liddy? Remember John Poindexter, he of the photographic memory, testifying under oath that he didn't 'recall' or 'remember' 184 times? Remember how ultimately they just blamed a corpse(Casey)?

I'm sure most folks don't have a clue as to what I'm referring to, and if you're a kid in Texas ... most certainly you won't!

Clinton, the kid from Hope, and his whore-mongering buddy Dickie Morris triangulated themselves into reforming welfare and balancing budgets ... perhaps that was the first sign that we had shifted into some alternate plane of political reality. A liberal boomer that leaves a liberal legacy of what ... parental leave?

Incurious George took the 'bizarro universe' to an art form though. Staffing Justice with lawyers from fourth-rate universities, putting wolves in charge of hen houses ( i.e. department heads that had spent their entire life fighting against the regulations they were supposed to now enforce), passing budget busters like Medicare Part D which added oh about 8 trillion in unfunded liabilities to your kids and grandkids, and launching a war in Iraq run with the aplomb of a bong-addicted college liberal. Hey we didn't put up that Mission Accomplished sign, we have no idea how it got there. Democracy is on the march dude!

Yes Bush passed tax cuts and bailed out Wall Street ... fiscal prudence aside, that is what a conservative is supposed to do.

Now to the current president. As a fierce social liberal (and fiscal conservative ... duality of life dontchaknow) well I guess the best I can say that all us social liberals have thus far is a t-shirt that says 'I voted for Barack Obama but I got Barry Dunham.'

An ubiquitous bankster friendly policy from the enabling Federales ... check.

You want to reform the 'health' industry Barry? Public option or forget it. And while you are at it get rid of those 'ask your doctor' commercials. 336 BILLION to the insurance industry over 10 years is porn not reform. Spare us the Chuck Yeager 'defense is a jobs program' antimatter incarnation that the 'health reform' plan is a jobs program. We need wealth reform not some Potemkin health reform. Apply the doctrine of capitalism where it belongs ... liquidating and ring-fencing rich folks' bad speculative bets that if allowed to continue roaming the earth in a zombified state will continue to liquidate the productive economy. Health reform falls under 'promote the general welfare', given your background there is no need to email you the constitution in hopes that you might read it, is there?

And we all know that the Oracle at Eccles has junk in the trunk.

Toil and trouble, a bullisht bubble, the cops at the door? Hey, hey, stock's goin' double!

It won't matter until it does.

I want the Black French guy I voted for.
Posted by Anonymous Monetarist at 9:04 AM

AM have you heard of this bike race or have you ever attended it?
An unsanctioned race deep in the belly of New York’s biggest borough, the Red Hook crit

Unfamiliar with it.
Are you going to race?

i would just love to. but don't think i can get there by saturday night. what a hoot this great city presents itself as. just love it so much, so original so rogue so bandit.