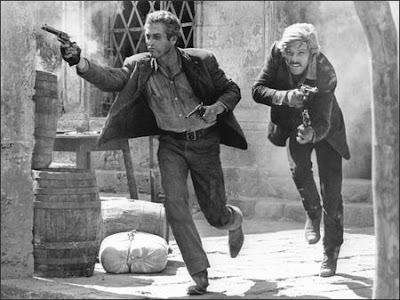 'Deflation is the midwife of hyperinflation.'
-Anonymous Monetarist

'For a moment there, I thought we were in trouble'
-Butch Cassidy

'In the long run we are all dead.'
-John Maynard Keynes

The chart above in yesterday's WSJ is as nasty, if not more so, than anything that even Doug Short has put out.

This graphic, double entendre intended, accompanied an article in the Whoa! Shill Journal that featured, the venerable Robert Schiller (no wonder I saw fear in his eyes in his last Bloomberg interview), and some cat who states that 'the market should spend a good portion of time trading below fair value, to match the time it spends trading above fair value.'

Now that's a chilling thought -rather somber fare from the opus of Nancy Capitalism.

If only there was someone who could present a more bullisht picture, some authoritative voice that could offer succor that pitchforks, torches, and wheelbarrows aren't the most appropriate 'stocks' for the long run...

"My research shows that the common P/E is 18.5" when the economy is coming out of a recession, Siegel says.

The way he looks at it, the market now is trading at about 14.5 times forecast 2010 profits, making it cheap compared with the typical P/E of 18.5.

Whew, don't know about you but I feel relieved, Schiller is just calculating PE wrong. No worries!

S&P adds together, dollar for dollar, the large losses of a few firms to the profits of healthy firms without any regard to the market weight of the firm in the S&P 500. If they instead weight each firm's earnings by its relative market weight, identical to how they calculate returns on the S&P 500, the earnings picture becomes far brighter.

Yet when S&P calculates earnings, these market weights are ignored. If, for example, Exxon-Mobil earned $10 billion while Jones Apparel lost $10 billion, S&P would simply add these earnings together to compute the aggregate earnings of its index, ignoring the vast discrepancy in the relative weights on these firms. Although the average investor holds 1,381 times as much stock in Exxon-Mobil as in Jones Apparel, S&P would say that that portfolio has no earnings and hence an "infinite" P/E ratio. These incorrect calculations are producing an extraordinarily low reported level of earnings, high P/E ratios, and the reported fourth-quarter "loss."

As the fourth-quarter earnings season draws to a close, there are an estimated 80 companies in the S&P 500 with 2008 losses totaling about $240 billion. Under S&P's methodology, these firms are subtracting more than $27 per share from index earnings although they represent only 6.4% of weight in the index. S&P's unweighted methodology produces a dismal estimate of $39.73 for aggregate earnings last year.

If one applies market weights to each firm's earnings using the same procedure that S&P employs to compute returns, the results yield a more accurate view of the current profit picture.

AM here:Guess we now know the way Siegel 'looks' at it. Couldn't believe this tripe when I first read it. It took all of a few seconds of rubbing a couple of brain cells together to generate the obvious retort. The methodology of computing S&P earnings is only valuable in the context of the constancy of such methodology over a long duration. Taking a snapshot utilizing a different method tells you nothing lest you perform that calculation over the long-term and then compare your snapshot with historical results using the same methodology. In other words using a new methodology to come up with a PE of 20 needs to be understood within the context of using that same methodology to come up with PEs at say historical troughs...

He should be ashamed of himself as should the WSJ.

Here's a little bit of background on this fella ...

WIKI: Jeremy Siegel was famously bullish in 2000 just as the stock market was collapsing. In a BusinessWeek interview in May 2000 when asked whether valuation measures indicated the stock market was overvalued he replied: {Have we learned anything over the past 50 years? When we compare a 100 years' PE's, we're going through the Great Depression, a banking collapse, and all the rest. Have we learned how to prevent a banking collapse? A Great Depression? I would say, yes, we've had incredible success. Have we been in the longest economic expansion in history? I would say yes. Are earnings of the top companies growing at the fastest rate that they ever have, far faster than the peaks that you mentioned in the past? Yes."}

Siegel's personal, for-profit website, jeremysiegel.com, is highly atypical among academic professors. In addition, Siegel has not published any peer-reviewed academic works over the past decade.

The Unbearable Brightness of Doing Nothing is your humble blogger's call.

The second mouse gets the cheese.

That frightening chart suggests a trap will be sprung...

AM - If you liked the Shiller chart, you'll love this.

cramer's is the wall of shame so your probably safe.
+

That's the mother of all regression channels :)