Random Walk, R.I.P... Look, matey, I know a dead theory when I see one, and I'm looking at one right now. 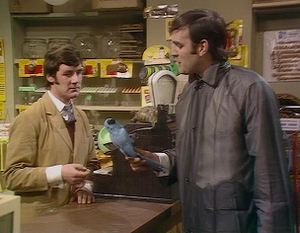 'It's not pinin'! It's passed on! This theory is no more! It has ceased to be! It's expired and gone to meet 'is maker! 'It's a stiff! Bereft of life, it rests in peace! If you hadn't nailed it to the masses it'd be pushing up the daisies! It's metabolic processes are now 'istory! It's off the twig! It's kicked the bucket, it's shuffled off 'is mortal coil, run down the curtain and joined the bleedin' choir invisibile!! THIS IS AN EX-THEORY!!'


... markets are only efficient - if indeed they are - in respect of information held by outsiders. But fair value accounting changes the behaviour of insiders - those running the firms - who have different information. To that extent, fundamentals affect prices, but prices also affect fundamentals.

Such an argument might seem surprising from the bone-dry Chicago school, home of Eugene Fama, the father of the efficient market hypothesis. Indeed, Professor Haresh Sapra of Chicago's Booth School of Business is at pains to stress he is not claiming that anyone is acting irrationally here.

This should not surprise us. As Thomas Kuhn, the philosopher of science, showed 50 years ago, scientists will not abandon a paradigm, however shaky it is, until a satisfactory new one comes along. For to work outside the paradigm is to abandon science.

In the quasi-science of economics, or even accounting, something similar applies. However broken the model, it must be maintained until an economic Newton or Einstein invents a better. It could be a long wait.

AM here: No need to abandon science Tony, in fact all you need do is embrace it. For in fact the efficient market hypothesis anchored by random-walk has been debunked, disproved, and lampooned. It has run down the curtain and joined the bleedin' choir invisible.

The satisfactory new paradigm? Why that which has been advanced by Benoit Mandelbrot, the Fractal Man, Sterling Professor Emeritus of Mathematical Sciences at Yale University and a Fellow Emeritus at IBM's Thomas J. Watson University.

Seriously Tony, you can look it up!

And when you do implement that indispensable toolkit of opposable thumbs and frontal lobes in the service of Senor Google here, dear sir, is what you will find:

You will find that when examining price records, you will typically find a different distribution than the bell curve bandied about by the high priests of random walk.

You will find a power law relationship. Power laws exist in nature, for example, gravity weakens by the inverse power of two with distance. Power laws describe the distribution of income in the upper reaches of society. Power laws also apply to the price movements of many financial instruments. Power law distributions allow for many more price swings than would the bell curve and this 'new paradigm' fits the data for many price series.

Mandelbrot first provided evidence to this almost 50 years ago, in 1962, when he showed that a century's worth of cotton price movements did not fit the bell curve, there were too many large tails due too far too many big price swings, and these tails followed a power law.

In Mandelbrot's book, 'The Misbehavior of Markets : A Fractal View of Financial Turbulence' he references how Warren Buffet once jested that he would like to fund university chairs in the Efficient Market Hypothesis, so that the professors would train even more misguided financiers whose money he could win. He called the orthodox theory "foolish" and plain wrong. Yet none of its proponents "has ever said he was wrong, no matter how many thousands of students he sent forth misinstructed. Apparently, a reluctance to recant, and thereby to demystify the priesthood, is not limited to theologians."

Clearly reality is the tail risk.

The new paradigm Benjamin is fractals.

Per Benoit: 'Price changes are not independent of each other.My heresy is a different, fractal kind of statistical relationship, a "long memory." Why this should be is not certain; but one can speculate. Whatever the explanation, we can confirm the phenomenon exists- and it contradicts the random-walk model. Contrary to orthodoxy, price changes are very far from following the bell curve. Such theory predicts that index swings of more than 7 percent should come once every 300,000 years; in fact, the twentieth century saw forty-eight such days. Truly, a calamitous era that insists on flaunting all predictions. Or perhaps, our assumptions are wrong.'

Mandelbrot discerned that markets exhibit a wild trait of abrupt change or discontinuity. This hierarchy of turbulence, a pattern that scales up and down with time, he describes as the Noah Effect - catastrophic, but transient. This Noah Effect is seen in the market's discontinuity : this is the pillar of fractal geometry.

The market's second wild trait - almost-cycles- he describes as prefigured in the story of the prophetic dreams of Joseph, a biblical tale of pattern recognition or long-term dependence. The Joseph effect is the influence of a long-term memory through which the past continues to influence the present.

Per Benoit: ' But how exactly do these two effects- Noah and Joseph, dependence and discontinuity - interact in markets? Answer: At least one market mechanism I identified naturally leads to the other. Suppose, for instance, that you have an "almost-trend" emerging in a stock price: a few weeks, say, in which a stock price rises seven days out of ten. The pattern must eventually break up, of course; otherwise, it would be a real trend that you could bet on continuing a few weeks, and hope to make some real money. But when the "almost-trend" finally does break, it can do so rapidly. A sudden lurch downward, perhaps. A discontinuity. Or, in the terms of the Biblical metaphor, a Noah Effect produced by Joseph-style dependence.

For some real-world examples, think about investment bubbles. They seem calamitous -but they happen all the time. Conventional economics tells us they are aberrations, "irrational" deviations from the norm, caused by a rapacious speculator, mass greed, or some other unpleasant factor. But under certain circumstances they can be entirely rational and flow from the entwined effects of long-term dependence and discontinuity.

The distribution of price changes in a financial market scales. Given that event X has happened, what are the odds that Y will happen next? With financial prices, scaling means that the odds of a massive price movement given a large one are akin to those of a large movement given a merely sizable one. Such is the confusion of scaling. It makes decisions difficult, prediction perilous, and bubbles a certainty.'

Ah but to channel a canucklehead on Bubblevision, 'Dear Anonymous Monetarist, is it actionable?'

The answer gentle reader is, Quite so! Although some methods are more equal than others.

Bits and pieces are garnered and applied to some method usually resulting in vast longitudinal charts with squiggles and wiggles and a fair amount of confirmation bias.

One of the most advanced practitioners of these arts is the venerable Jeffery Cooper of Minyanville, a Gann student and Swing trader.

Gann is a launching point in consideration/confirmation that random walk is meant for history's dustbin, but he only scratched the surface.

Mandelbrot completely refuted random walk but it was too hard for folks to accept; hence Mr. Jackson's lament for a new paradigm.

But there is one fellow who can give you the tools to trade this half-century old theory of fractals.

His name is John Needham. The website is www.thedanielcode.com.

Check it out and follow the trades posted the night before each trading day.

Believe what your eyes see.

Think outside the cave!
Posted by Anonymous Monetarist at 8:35 AM

Bubbles are only 'irrational' when the participants know they are in a bubble and expect to lose their money. Clearly, no one expects this outcome who participates in a bubble.

Buying gold because you are under the impression that someone else will pay more for it, bubble or not, is no more irrational than buying tech stocks under the same premise.

Cite an example of 'irrationality'

Fools can act perfectly rational in priming a bubble if they believe they can get out before it bursts. Acting on an information advantage, perceived or otherwise, is not irrational.

Markets behave rationally most of the time. Emotion and panic will change people's rationale for acting; this does not mean they are irrational. Based upon information at the time, they acted in a way to maximize their utility - ie, people do not always make decisions (investment decisions) based upon profit maximization. In fact, it is now argued by some that people make decisions based upon relative status maximization:

Relative status maximization certainly makes sense with regards to bubbles. People will copy others because it ensures, at the least, equal relative status. I see this all the time in trades individuals my group enters into.

Furthermore, we see people trade of inside information all the time. I experienced it first hand with regards to QE and US Cash Treasurys. However, the vast majority of the time people 'dont know something' and the markets do behave in a random walk.

Again, EMH still exists most of the time (at least in its weak form). When shit gets 'real' people will act based upon the information presented to them in order to maximize their relative utility. That could mean a number of things and a number of reactions.

However, I absolutely agree that Gaussian probabilities are not gospel. But they are still the best method available.

People advocated 'flat earth' for quite awhile and it served them well.

Flat earth worked most of the time too unless you dared to look for the edge.

Empirically, random walk, is a bust.

Random walk and Gaussian premises can not explain what has occurred.

Perhaps our assumptions are wrong.

Believing in a flat earth precludes one from discovering what is truly 'out there.'

With financial prices, scaling means that the odds of a massive price movement given a large one are akin to those of a large movement given a merely sizable one. Such is the confusion of scaling. It makes decisions difficult, prediction perilous, and bubbles a certainty.

A thousand mile journey begins with the first step.

The thrust of this posting was to believe what your eyes see and take that first step to the edge of the 'flat earth' theory...

Think outside the cave!