A generation busted by liquidity lusted, the foreshadowed truth? denouement of the trusted ... 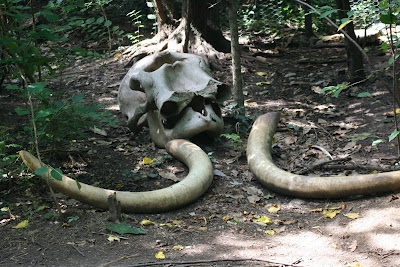 'A senator asked then Treasury Secretary Henry Paulson whether the "well paid officials and directors of the mortgage companies" should be held accountable. Paulson replied," "I'm not looking for scapegoats."
- Grant's 04/02/10

'Spotted curbside in downtown Washington: Hank Paulson, tanned from a recent trip to Argentina, huddling over a BlackBerry he still is getting acquainted with. As Treasury secretary, he refused to use a BlackBerry, preferring phone calls to email, but he has now succumbed.'
- WSJ Heard on the Street 04/07/10

Paulson tells us in 'On the Brink' that he doesn’t write things down or use email, so the entire book was done from his “facility” for memory.
-marketminder.com


Folks that live in a world of plausible deniability never commit anything to writing.

Deceit and subterfuge are merely precautionary measures. No need to question whether anything said by a person is true or whether the speaker would ever need to stand behind it. The temptation to obtain stuff in writing or have conversations recorded for later use in proving the truth is obviated.

Emails are denounced as cold and impersonal. The conspiracy of silence is the lingua franca.

The Federales 'Wise Guys' realize that those that go 'oobatz get pinched', and that there is never a good time 'to eat alone' lest one becomes 'guests of the state'.

One can only imagine though what the emails of the bureaucratic 'cafones and poveretts' at BLS might one day reveal: they seem to have foregone even making a semblance of precautionary effort as they paint the Potemkin economic village with an 'ever diminishing' credible brush ..

And now as relayed by the venerable Bill King :'Once again we see chicanery in the March Employment because the Household Survey shows a gain of 264k jobs but ‘Men 20 years & over’ accounted for a 290k job gain. ‘Women 20 years & over’ lost 42k jobs. This is absurd!'

What will be the title of the April Household Survey? 'Stats from Mars, B$%#*&@t from Venus?'

Pay no attention folks to the fact that the Birth-Death added 81K while ADP subtracted 112K small-business positions. Pay no heed to Gallup reporting the underemployment rate is now over 20%.

Unemployment levels are empirically higher than they were during the worst years of the Great Depression (you can look it up!) but signs of recovery are all around us dontchaknow...

We've tossed trillion of meatballs on to the fire to fuel this V-shaped, scratch that, nascent, scratch that, 'seeds abounding' recovery and yet just a teensy-weensy rate increase might cause the markets to crash!

You, gentle reader, know your humble blogger's take as to the why and wherefores of our blessed custodes paranoia that there are deflationary 'elephants in the womb':'Failure to liquidate the insolvent banksters has led to the liquidation of a large part of the productive economy.A taxpayer financed bailout of rich folks' bad speculative bets has resulted in zombie banks and zombie customers... a fiscal tide that lifts no boats.' (AM Rule #7)

In today's WSJ, yet another example, a listing of the amount of level 3 assets at the major banksters:

WSJ of course mistakes the trees for the forest, describing the toxicity of 'one part of bank balance sheets' while ignoring the fetid swamp that is the 'other part'- the part that if you imbibe of the pablum narrative swill has been Voldemorted out of existence... namely QSPEs and VIEs.

First though, noticed that Smells Fargo was not in the WSJ's top 5 (above)...

For a good laugh I jumped to their 2009 summary (are you ready for this?):

Oh my stars and quarters!

For your perusal, once again, a delineation as to the pervasiveness of the rot...

After a cursory scrubbing of Bank of America and Goldie just couldn't come up with an accurate QSPE count. These numbers do not count the billions upon billions of VIEs.

If this generation was the boomer will the next be called the busted?

A generation busted by liquidity lusted, the foreshadowed truth? denouement of the trusted ...

Or to put it another way ..

After World War 2, our blessed leaders, impressed by German 'organizational' skills crafted a policy of manufacture of consent.Over time these techniques moved to the economic realm in an attempt to manufacture content.Federales now risk the manufacture of contempt, for it is only a Great Depression if they say it is. (AM Rule #1)
Posted by Anonymous Monetarist at 9:12 AM

Can you drop the names of financial/investment newsletters you like to read?

I'd like to grow up to be able to break apart financial issues the way you do. And I think imitating some of your reading habits might help.

Well, I read the comics each day - FT and WSJ.

Minyanvile, esp.Todd Harrison, Peter Atwater and Kevin Depew(DeMark)& can't miss Jeff Cooper(Gann&Swing). He's (Jeff) closer to what I consider to be the truth than any other mainstream source.

Fleck from time to time.

And then of course blog-surfing when the mood strikes...

As for trading .. thedanielcode.com was the end of (as well as the beginning of) a fairly long journey.

Setting up a separate desk for that ... fantastic stuff!

Needham shows an explicit trading method to a theory that, although centuries old in substance, was first advocated scientifically half a century ago by Benoit Mandelbrot, the Fractal Man.

Try to always have one or two books cookin'... only non-fiction though...

I like Grants, Faber, Shilling, and Dines. I'll have to check out the others.

And some blogs by people that seem older and wiser than I.

Have followed Shilling, especially given his recent prescient calls.

Dines is new to me.

Dear AM,I work with college-age kids and newly arrived Americans,and thank God I interact with these good people every day.It gives me optimism that we will emerge from the ashes and tears someday.A nation made from the world's unwanted has some formidable strengths,which will come in handy before long.AM,may I ask you for your best guess,as to when the fit will hit the shan?How much longer can this surreal "recovery"last?Thank you,Mark.

First, THANKS! I've been silently following your comments, both here and at ZH, for some time. I always considered myself a decent writer, but have been humbled by your talents for analysis and concise, poetic delivery.

Second, as other posters have alluded, this is all about education. We've got a five-year old daughter, and I'm curious if you're home-schooling. If so, would you be kind enough to share curriculum or thoughts?

Dines writes The Dines Letter, and he's made good calls over the past couple years. He recommended getting out of treasuries in december 2008, but thinks were in for long term deflation, and waiting for yields to rise high enough for them to be a good buy.

Recommmended buys in stocks in march 2009, and rare earths in mid-2009. His thing is to try to catch big swings in the market by tracking mass psychology, although he recommends specific stocks by looking at their fundamentals.

I also like the index investor. They try to value asset classes using modern methods, but they strive for objectivity by using a method of alternative competing hypotheses, which they call ACH. If they think stocks are way ovarvalued, overbought, etc, they send out warnings, and did so in 2000 and 2007. They try to value asset classes with a probabalistic handicap (possibly, likely, probably), and try to handicap expected returns in inflationary, deflationary, or neutral environments over the next three years, as well as an expected return given their rough probability estimates for the three.

If you want samples of either, post a fake-anon email address, and I can send.

Am not home schooling although treasure each interaction with the kids as a 'teaching' moment.

Sister does plan to home school, certainly do understand their motivations but view the social interactions, both good and bad, of the'institutional' path as critical skills of development.

Wife and I see our roles (as parents) as assiduously applying the 'thought' filters to help guide the little ones through the vicissitudes of life.

He who professes to have a crystal ball ends up with a mouth of broken glass.

The future is known to no one however there is no doubt that a storm is approaching.

Denouement of the trusted seems to be the endgame, but the elites certainly will not go 'down' without a fight.

Share your long term optimism, the promise of America still lives, the dream that you can make from clay what your heart and mind can conceive still exists.

But we are making it so much harder on ourselves by abandoning the principles that we articulate to our children as America's strengths while dismissing realities and ringfencing rich folks' bad speculative bets.

This blog was started on November 15, 2008 with the following post which I believe still rings true:

When I walk down these streets it is as if the air itself is a bit out of phase.

An almost imperceptible shift that is slowly and insidiously forcing itself into my vision.

As if the color itself wished to recede into sepia, an encroaching nostalgia of hardship embellished as pragmatism.

The shuttered shops are mostly characterized by the discretionary nature of their wares.

The nouveau establishments started for another time.

Capitalist excess that will soon be just another example.

The block where it resides, a monument for success.

Now I can’t help but wonder how many residents are trapped with the pendulum swinging closer.

When I jogged through the great city this summer construction was still abounding.

Cranes littering the skyline like a rising metropolis of the East - I felt pride in the ascendancy of these monuments - a testament to the optimism and spirit of my countrymen, while at the same time wondering whether the cranes would remain long after the anticipated completion dates.

Mom asked me the other day, ‘What’s Happening?’

This much is clear: They will inflate until they can’t. Inflation rewards those that have their wealth first. All roads lead to deflation. The stock market will bottom when no one cares. Much like the aristocracy when the barbarians are at the gates… you save the silver (banks) first. They will destroy the village (dollar and markets) in order to save it. After the deflation is overwhelmed, the West will never be the same.

I try to listen to the passing conversations; the tone has changed with the headlines.

With a constructive and patriotic lens, great opportunities await.

This process though will indelibly imprint itself upon the next generation and her immediate forbears.

May God bless and keep safe the United States of America.

Thanks for taking the time to respond.

Will check out your referenced materials.

Thank you AM,for your time.I continue to read through the blog archives-they are an education in themselves.Serendipity-I found this blog while looking for something else.Senior year in High school I happened to receive not one or two,but a half dozen of the most incredible men and women as my course teachers.I lost interest in my- ahem-less constructive pursuits,and to this day can't imagine life without a good nonfiction book in progress.There is no undertaking more noble than to teach.A good teacher can change lives, every now and again,they change the world.Thank you.Mark

Thanks for the reply. I completely understand your viewpoints regarding social interaction where your children are concerned; our home-schooling decisions are driven by circumstance (I lead an itinerant life as a result of my chosen field of endeavor) more than principle.

Thanks again for the thoughts. Keep up the great work!

When the student is ready the teacher will arrive.

The challenge is to be mindful so that one can recognize when the situation calls for one to teach or for one to be the student.