Hemlock as libation in Reflation Nation . The Reimagining of Capitalism 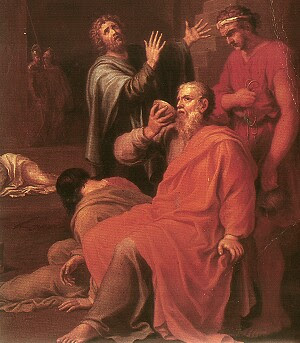 'I've abandoned free-market principles to save the free-market system ... I am sorry we're having to do it'
-George W. Bush, December 16, 2008

'They have spoken words, swearing falsely in making a covenant: thus judgment springeth up as hemlock in the furrows of the field.'
- Hosea 10:4

Above the fold, today's WSJ : 'Evidence Mounts of Strong Recovery.'

But pay no attention to the little tidbit that the Commerce Department put out in their Dec. 11 release: "Special Notice -- The advance estimates in this report are the first estimates from a new sample. The new sample for the Advance Monthly Retail Trade Survey is selected about once every two and a half years."

What a shock that retail sales have been trumpeted ever since this 'new sample' has been implemented.

And what was the new sample?

Out of 5,300 retailers and restaurants sampled, only half of those in November were also sampled in October. The other half were brand new to the survey!

Might one suppose that a number of companies that weren't questioned were ex-companies?

Might one suppose that the brand new spankin' companies to this survey were chosen with some purpose in mind?

It's like diagnosing the health of a fish whilst only observing the severed head.

The article goes on though to highlight one glorious example of the evidenced strong recovery:

'The rebound is benefiting Robert Mayfield, owner of five Dairy Queen restaurants around Austin, Texas, where he recently launched a new five-dollar deal including a quarter pound burger, fries, a drink and a small Blizzard dessert. The response was tremendous, said Robert.'

Seriously WSJ? How could you not comment on the land rush to get the Jalapeño triple stacked at Whataburger? And what about Daisy Mae trumpeting that the very berry pancakes at IHOP are going like .. er hotcakes! Its' a V-creped recovery!

That's a round mound of reboundin' recovery in the service sector eh?

Of course the WSJ also cites the rising financial markets as prima facie not to mention the new efforts to forgive mortgage debts....

Every day and in every way this s%&t is starting to resemble a bad science fiction movie from the 70s.

And segueing from fiction and dead fish we have Jaime 'Whine on you Crazy' Dimon seeing not a wolf at the door but a big bad recovery. Considered by many as a good bankster (oxymoronic?) his endless opprobrium to any and all (perceived) anti-bankster slash populist slash counter-productive initiatives on the Hill is only matched by his delirium in staying in front of the currently dyked creative destruction wave that would too expose his grand enterprise as being too bankrupt to go broke...

Mr. Dimon's rising optimism, states the WSJ in the top of the fold headline Section C, 'The Day the Banks Turned the Corner', is triggered partly by a show of hands in meetings where he asks how many of youze entrepreneurial guys plan to hire more?

"20%, 30%, 40% raise their hands" Jamie D gushes. And then to fun-house mirror the quixotic anecdote referenced in the Page 1 article above, the WSJ goes on to highlight one of the (presumed) hand raisers:

'John Sang Wilbur organizes summertime ski, snowboard and Spanish-language instruction trips to Argentina {and} expects business to increase 35% ... Mr. Wilbur scrambled to get a new business credit card last year when the issuer of his old card stopped extending credit. He found a new issuer but soon plans to switch to a cheaper card from J.P. Morgan's Chase unit.'

Pay no attention folks to the facts that J.P. Morgan's loan levels are stagnant, retail banking has swung to a net loss and mortgage default rates are rising.

And my oh my just don't think about the fact that if junior-lien home mortgages were fairly valued J.P Morgan would have to be 'forced' to take money from a TARP 2.0 that 'it didn't need.'

Instead, gentle reader, please concentrate on the plum that is the 55% surge in quarterly profit which had 75% of its' origin in the investment banking operation- home of the bankster's 'potemkin solvency trifecta' :a 79 trillion derivatives book (mark to necessity), the MSR bucketshop (mark to farce), and the avalanching yield curve (mark it zero).

Hemlock as libation in Reflation Nation .

The Reimagining of Capitalism.
Posted by Anonymous Monetarist at 9:47 AM

Don't say you're losing hope. The very fact that you write this blog means you haven't. The writer John Gardner used to say that a writer is a physician of the soul, and does his bit to help the young's tendency to anguish, the middle-aged's to despair, and the elderly's to loneliness and depression, and a good writer acts to affirm the will to live despite its pitfalls and challenges.

And that, big AM, is what you are doing every day in this little corner of the web.

Head high, man. Progress may be slow, but you can see it here and there.

Your diagnosis is correct :)

Golly gee don't know what to tell ya.

I run the FDIC limit at a couple local banks for personal and business and then Interactive Brokers and a slug at TD Ameritrade (cause Canada is the safest ... at the moment).

Yeh know they are all banksters...
I also pay my taxes on time, go to church, and brush and floss on a regular basis.

Gun to head I see Deflationary Scare 2.0 before we really see how bad our (hyper?)inflationary ZIRPmesiters punch it.

Will probably be transferring some of the brokerage stuff to PFG as I set up a separate desk for the danielcode stuff.

Oh and concerning Dimon, this nugget just came through from the venerable Bill King...

An astute money manager from across the pond informs us that buried in the JP Morgan earnings report on supplement page 4, JP Morgan admits that an accounting change shaved $4.5B off its equity and adjusted for this change JPM would have shown an earnings loss for Q1.

yeah creative accounting.
ok i got the limit at TDameritrade in a non sweep account. if you think a canada holding bank is safe, ok. but their HQ's is in Iowa.
but imagine if i can't get my money when times are good what happens when their is a bank run!

You can worry yourself to death if you internalize worst-case scenarios...

I take it one day at a time.

I think that one of the safest bank in the US is USAA, very conservatively run and politically sympathetic given that depositors are primarily veterans and their families. I think Canada is overrated, because I think they have a housing bubble that hasn't popped yet. You can investigate banks' safety using a credit analysis service, like Institutional Risk Analytics. Or if you're cheap or lazy, use the list at the end of Prechter's book conquer the crash.


Not sure why you and VB are calling TD Ameritrade a Canadian parented bank. The TD Bank's stake in AMTD was initially like 30%, and I think it was capped at 40% in the acquisition agreement where AMTD acquired TD Bank's US brokerage business. AMTD is a conservatively run operation, and I'd take comfort in that. I wouldn't take comfort in the notion that Toronto Dominion would step in to protect depositors or brokerage customers at AMTD. Hell, I know of companies that have a policy of not standing behind debt of wholly owned subsidiaries. Plus, I think Canada is sitting on a res real estate bubble that'll hurt the Canadian banks.

I told you there are signs of progress. Why look, just today political heat forced Obama to bring fraud charges against Goldie. I heard a senator is mulling over the idea of proposing to revise the rules on liability for aiding and abetting securities fraud to require recklessness, instead of knowledge.

And if you guys really have a ton of cash lying around, you could get a segregated custodial account at a bank, and use it to hold t-bills. If you need to meet payroll, you could put laddered t-bills inside it. There are banks that set up accounts like this which you can use like a checking account.

Not meant as an endorsement of TD, just describing what I did when the house of cards wobbled.

Particular to my situation... had yen and yuan positions and an old friend at TD that bumped me into an institutional treasury bracket. At the time it was the best of what were perceived as bad choices.

Concerning USAA, my understanding is that they had zero exposure to subprime.

Concerning the progress, Goldie scoldie was a surprise as was the SEC probin' GE on its public assurances about its finance unit's liquidity.

The angel on me shoulder says better later than never, the devil says too little too late.

The continuing tragedy is that the banksters are too bankrupt to go broke and the Federales are determined to see that the victims, not the perpetrators, are punished for the crimes inflicted upon them.

We'll see if anything much more than hand-slapping occurs.

joe thanks for your information. i have no idea what you suggested means. but i do have a ton of cash sitting around. no idea what a segregated account is, i am solo. segregated sounds a little racist¿ maybe TDAM isn't great but they paid me back for an auction security bond they sold me and became no good. took me almost 8 months screaming at them. so i am loyal.
that a stupid reason babe.
what are T bills?

The scoldie for Goldie looks interesting. But based on the SEC's complaint, it remains to be seen whether it has legs.

Based solely on the complaint, the only potential I see for fraud is if there was an agreement, side letter, attachment, appendix, etc that ACA's authority to reject RMBS selected by Paulson was restricted, such that ACA was essentially limited to selecting the best of a bad bunch of RMBS selected by Paulson, and the disclosure said ACA was free to select the best RMBS around. If there was a difference like that between ACA's authority and the disclosure's description of ACA's role and authority, that looks risky to Goldie.

If you read the SEC's complaint, it says that ACA only proposed 21 RMBS, of which Paulson vetoed 8, with the balance of the 90 RMBS ultimately selected composed of a subset of the slate of RMBS selected by Paulson. It is unclear what authority ACA had to reject proposed RMBS and propose replacements. It is also unclear what the disclosure said regarding ACA's authority.

As I said, I think well of TD Ameritrade. I think Joe Moglia tried to make it an ethical place, and it doesn't have a lot of businesses, like trading, that can lead to conflicts with its customers. I just don't think that TD is AMTD's parent, that Canadian banks are necessarily in great shape, or that TD would necessarily stand behind AMTD's obligations to creditors or customers.

Whether a segregated account make sense depends on how much assets you have, and your outlook on risk, etc.

t-bills are short term debt of the U.S. Treasury, and you can buy them with very short maturities, e.g., 30 days, to limit the risks you face due to a rise interest rates.

Looks like an institutional game of he-said, she-said between Goldie and ACA per the weekend comics, i.e. WSJ and FT.

Your erudite commentary is well received.

“you can buy them”
how? don't see the buy button any where.

You can buy t-bills direct from treasury on their website http://www.treasurydirect.gov/indiv/myaccount/myaccount.htm

You can also contact your broker and ask them on the process for buying through your broker.

I'm not recommending or discouraging purchases of t-bills, just mentioning them as an option.