The United States of America LLC 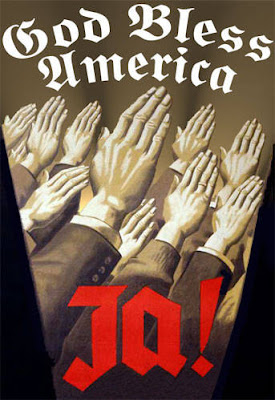 'Fearful people are more dependent, more easily manipulated and controlled, more susceptible to deceptively simple, strong, tough measures and hard-line postures. They may accept and even welcome repression if it promises to relieve their insecurities.'
- George Gerbner

Liberalism is the belief in the importance of equality and liberty. It promulgates reason as the primary source for legitimacy and authority. It stands in direct opposition to religion endorsed by the state, and plutocracy, the modern equivalent of absolute monarchy and the Divine Right of Kings.

The American Revolution (can you hear me Mr. Teabag?) promulgated liberal philosophy as their justification in rising up against the Crown.

Civil rights, individual liberties, the peaceful coexistence of different lifestyles and interests, where the common good can be achieved on the battlefield of dialogue, where power is not concentrated, and mutual respect and tolerance are exhorted... that's liberalism folks.

The antithesis of liberalism is elite theory where the windfall apples need be reserved for the more equal brain workers.

And what is conservatism?

As Robert Eccleshall once opined : 'It is the persistent image of society as a command structure in which the responsibilities of leadership can be exercised within the framework of a strong state manifested in divine-right royalism.'

Deference to authority, traditional institutions, an opposition to modernism, a yearning for the 'good old days', and advocacy of minimalistic change is the bedrock of conservative opinion.

British Psychologist Glenn Wilson stated per his book, 'The Psychology of Conservatism' (1973), that a general factor underlying conservative beliefs is "fear of uncertainty."

To apply these categories, ontologically, to today's conservative and liberal is challenging to say the least.

A conservative president embarking on nation building with the aplomb of a bong-addicted college liberal? Hey we didn't put up that Mission Accomplished sign, we have no idea how it got there. Democracy is on the march dude!

A liberal president advocating Potemkin health reform, approximately a third a trillion to the insurance industry over 10 years, decried by conservatives, whose last president prescribed 8 trillion in unfunded benefits, as socialism? The same president lauding nearly a hundred billion in weapons as a jobs creation program?

An ubiquitous bankster friendly policy, (although to be fair Bush just gave Paulson the keys, Barry Dunham actually had a stronger hand on the rudder) where trillions in rich folks' bad speculative bets were swept under the FASB? And a continuing national discourse squabbling about nickels as the banksters steal gold bars out the back?

The liberal welfare state? Who's zoomin' whom? Welfare is most certainly not just for liberals in the United States of America LLC.

And our
Posted by Anonymous Monetarist at 10:19 AM

Up is down, left is right. What you mean is Old Testament, Mr. Monetarist, real wrath of God type stuff. Dogs and cats living together..mass hysteria!

Liberals are conservative, conservatives are plutocrats, and no one really even understands the etymology behind any of those terms.

Things are bad, and getting worse. A friend of mine and I were discussing today how no one in this country understands what happens as exponential functions progress.

Everything seems fine. Until it's not. Here's prayin' that 3M doesn't stick in 2012.

I am really happy you decided to resume posting.I am really worried about the MMM,as you identify her.I'm struck by the parallels between FDR and Adolf Hitler and Obama and the MMM. FDR and Obama made their pitch to the good parts of human nature,Hitler and the MMM appealed to the evil side .If we get a great inflation that destroys the life savings of the middle class,as Germany suffered,could there be enough people blinded by anger to elect her?There is a certain smirking cruelty about her,just beneath the folksy veneer.Mark

Discussion of the subject of the meanings of "liberal" and "conservative" is one that I've been having pretty regularly since I learned the original classical definitions which you correctly lay out in the beginning.

I use Class as important factor in these definitions because it is important to remember that the 'liberal' concept of 'Democracy' as it was brought forth in the last 400 years was strictly reserved for for the wealthy/owner class. This 'Noble Class' was concerned and motivated by the historic abuse of power by the King; simplistically, they sought "liberation" from the State for their wealth, realty, and influence of the people. Those loyal to the King (or the State beyond the individual wearing the crown) wished to "Conserve" the States power over everyone and everything as a divine right of Kings, as long as those maintaining that power enjoyed the spoils.

So an interesting thing happened in the US as wealth began to accumulate during the Industrial Revolution and create what is known as the Robber-Baron Class of the late 19th and 20th centuries. These liberals used their ill-begotten wealth to cement their place in history by taking control through 'liberal education.'

At the beginning of the 20th century, this class began endowing universities and opening think-tanks and schools of economics and political science which taught these subjects in a way which would benefit them.

This was when the obfuscation of the classical political terms "Liberal" and "Conservative" occurred; the meanings were mixed up with economics and practically turned upside-down and then interchanged and turned inside-out and replaced.

So now we have a group of Neo-Liberal/conservative/Republican/Neo-Cons who espouse dogmatic ideologies of individual responsibility from the State and free market, whose wealth and power is enabled through total State supported protectionism, who want nothing more than total world domination by the privatization of all wages, services, and indeed--Human Rights. Their competition are a corresponding group of Neo-conservative/liberal/Democratic/Neo-Liberals who embrace imperious reveries of the responsibility of individuals to the State and the free market, whose wealth and power are derived through domination of the State regulated industries, who want nothing more than complete planetary preeminence by the privatization of labor, natural resources, and indeed--moral high ground.

The People, who are Subjects of these two competing groups from the same class, are left to debate what's left of politics and economics with broken and incomplete terms--confined to subjects which bear no more than the illusion of salience when it comes to the reality of their lives (such as immigration, abortion, "health" care, etc).

Of course, I could illustrate my point further, but I'm limited on time at the moment. Thanks for the post!