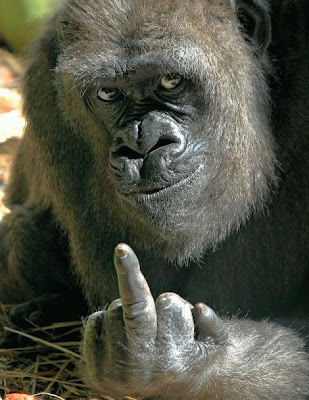 'Make the lie big, make it simple, keep saying it, and eventually they will believe it.'
-Adolph Hitler

'There are a lot of people who lie and get away with it, and that's just a fact.'
-Donald Rumsfeld

'Repetition does not transform a lie into a truth.'
-Franklin D. Roosevelt

'The first casualty of war is not truth, but perspective. Once that's gone, truth, like compassion, reason, and all the other virtues, wanders around like a wounded orphan.'
- Ente Grillenhaft

'The 1st panacea of a mismanaged nation is inflation of the currency; the 2nd is war. Both bring a temporary prosperity; a permanent ruin.'
-Ernest Hemingway

'I just want you to know that, when we talk about war, we're really talking about peace.'
-George W. Bush

"We're not going to monetize the debt."
-Ben Bernanke

'We are never deceived; we deceive ourselves.'
-Johann Wolfgang von Goethe


Left the Cubs game at the earliest point, (fourth inning - they were being clubbed by the Cardinals), that this fella has ever remembered abdicating his first row seat. But stayed long enough to listen (covertly) to a group of VIPs discuss their plans on renovating Wrigley, how the ivy was loosely covered under the declarations of the National Registry, how any modifications would need to keep up the appearance that things really hadn't been changed much, and how perceptions needed to be handled both in Washington and Clark & Addison whilst maximizing revenue.

True profanity to the ears of a worshiper at the shrine of futility.

And also a fractal writ large of the daily Vaudevillian interplay of the comics (WSJ and FT). Verily, 'tis a war against the future.

The dividing lines have been drawn, on one side are the Naysaying Nabobs of Nancy Capitalism that, with beige books extended, are unwavering in their dogma that Chairman Ben will perpetually liquefy their chalice of confidence, and on the other side are the few the proud, the misfits... the Atticus Finchs that believe that reality is the tail risk. With arms extended they proclaim : We are not idealists to believe firmly in the integrity of our economic system. That’s no ideal to us. That is a living, working reality! Now we are confident that you Mr. Market will review without passion the evidence that you have heard, come to a decision, and will uh, uh, well, uh ...

Then they stop and scratch their head and say ... the government is all in isn't it?

The Office of Economic Influence headed by the Oracle at Eccles like all progenitors of psych ops has to, by necessity, weigh whether the harm done through their deception offsets the good that same, purportedly, will accomplish.

Continual disinformation can result in damaging blowback, and most certainly the denouement of the trusted is a high-priority target to be avoided lest the surplus eaters start to believe their lyin' ojos and reject the Divine Might of Wizards.

Psychological operations are planned operations to convey selected information and indicators to audiences in order to influence their emotions, motives, objective reasoning, and ultimately their behavior.

And much like 'modifying' the ivy on the walls at Wrigley deflation is true profanity to the ears of a worshiper at the shrine of liquidity.

The struggle of virtue and vice is writ large as the debate between deflationistas and debasinistas. Ones' lens depends on what one means by ones' ends. The deflationistias mean that deflation is the midwife of hyperinflation. The debasinistas pray that familiarity breeds content and not contempt.

So tell me Morpheus how can they camouflage debasement in a no-stimulus zeitgeist?

'The Fed did a major juicing of the system by adding $11.059B for the week ending on Wednesday. More importantly, the Fed’s balance lost only $361m of MBS. It’s inconceivable that the Fed received $10+B of interest or principal prepayments on its $1.09 trillion of MBS in one week.

The Fed monetized $10.461B of Treasuries. The NY Fed has done $20.887B of POMOs, which are Treasury monetizations. There is a POMO scheduled for today as well as Tuesday and Thursday of next week. (http://www.newyorkfed.org/markets/pomo/display/index.cfm?showmore=1&opertype=orig)

The size of POMOs has increased the past two weeks. So the Fed is on pace to monetize $30+B of Treasuries for September. This is almost a 34% yield on its $1.09 trillion MBS portfolio – less the amount of principal repayments, which we don’t know because the Fed won’t tell anyone.(http://www.newyorkfed.org/markets/agency_agencymbs_faq.html)

As we keep screaming, QE 1.0 has not ended despite official proclamation that it had. The bottom line is Bernanke and the Fed have been lying about the scope and nature of it - QE/debt monetization.'

Thanks for the Red pill Mr. King.

It's a madhouse.
Posted by Anonymous Monetarist at 9:51 AM

Have you included purchase of 120 day delinquent mortgages by Freddie Mac in your calculations? (See page 37):
www.freddiemac.com/mbs/docs/pcoc_031110.pdf

I've been transfixed this week, watching Japan, China, and even some South American nations begin to take a whack at their own currencies. It seems the game is now afoot, and picking up speed. For me, the question "what's the frequency, Kenneth?" seems apropos.

It's one thing for us to endure the flailing Fed as a single entity; I'm afraid it's going to be quite another to endure the effects of these caroming spheres of influence bouncing into one another at an ever-quickening pace.

Dogs and cats, living together.

The Cubbies will win when the time is right.