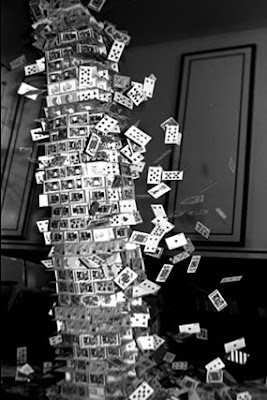 'The job before Congress is to bring the fear of God back to Wall Street. '
-James Grant

'Statutory directors, board members, and controlling shareholders of Brazilian banks have their entire net worth at stake if their banks fail. All their personal assets are frozen for the duration of the liquidation process and may be used to cover any shortfall.'
Bruno Rocha, Dynamo Capital

'Clowns to the left of me, Jokers to the right'
- Gerry Rafferty

Don't know what to make of the financial reform bill.

All things being equal though my empirical thesis until proven wrong is that its' not merely a matter of 'fool me once, don't fool me twice', its' more accurately described by can we please please stop the f$%&*g 'serial fool machine' and resultant perpetual enabling of the 'greater fool' pablum narrative?

Fed Audit? Will probably qualify for a social security retirement benefit that won't exist by the time we see the 'fraudulent conveyance' of the Eccles ledgers. Sure that the assemblage of tribes, our noble plutocracy, will fight it all the way to the Supremes... wonder how that will turn out...

Once upon a time we had leaders, yes they had their draw backs, they objectified and subjectified their brother because of melanin production ( and treated the sisters poorly too regardless of same) and if it wasn't for a burdensome tax rate they probably would have remained a British territory ad infinitum, but still they provided some intellectual heft to the rights of the individual versus the state and the role of each within society.

Who are their progenitors? Who will advocate sense over the senseless?

As an example of what would make sense please consider this plan from Wilbur Ross:

"My proposal is that lenders who agree to downsize a mortgage to today's values be given the following deal, regardless of whether the mortgage was in default or not:

• First, the federal government would guarantee one third of the reduced mortgage. This would give the lender an asset [that can be sold] at par and therefore provide liquidity to the mortgage market.

• Second, the lender -- in return for reducing the mortgage principal amount -- would get one-half of the appreciation on the first resale, until the lender had recouped the forgiven principal, without interest.

• The government would get one-fourth of the appreciation up to the same cap, on the first resale, as a form of insurance premium.

• And the homeowner would get one-fourth of the appreciation back to the original principal amount -- and 100 percent of any further appreciation."

Seems pretty simple doesn't it? 'Twould be a few paragraph attachment to the title. Not saying the plan is perfect, but it is a step in the sensible direction of risk-takin' not risk-fakin'.

Let me guess though what would happen if this made it to the Hill. Repubs would decry the nanny state, lobbyists would say it would curtail bank lending, and Libs would trumpet it and than negotiate all the teeth away with the Repubs...

Consider the 'resolution authority' being bandied about. Here's another common-sense idea, apply the Brazilian solution (see quote above). The left and right would spout the same Kabuki but Brazil came through the 'What Just Happened Crisis' fairly well didn't they?

Now their system certainly is far from perfect, the state takes much too much of a heavy hand, yet they do have a thriving banking sector, per heritage.org, the 10 largest domestic banks account for more than 60 percent of total assets. Three of the top 10 banks are foreign-owned. The two largest state-owned banks control about 25 percent of total assets.The government currently is allowed to take shares in struggling banks through the two largest state-owned banks, and a Credit Guarantee Fund introduced in March 2009 provides state guarantees on bank certificates of deposit.

Again not perfect but too big too bail and too big too fail becomes less germane when its' you lose you booze.

When its' your skin in the game its' blame mio not Rio.

And speaking of blame, looks like this weekend will be focusing on public versus private risk as the Germans choose between Mark it Gyro or Cough up Euro. Per a commentary from Adam Tooze in yesterday's FT, the May 9th North Rhine-Westphalia election may result in legislative gridlock.

He notes that as a share of local GDP, the debts of German states such as Berlin, Bremen or Sachsen-Anhalt are four to six times worse than California!

Can you imagine California voting to bail out Greece?

Per Reuters, the many potential triggers for an expanded crisis include ...any signs that Athens or donor nations are backing away.

Pair Merkel saying the European Project itself is at risk with an oft-quoted gem (on this blog at least) from Martin Armstrong :

'It was the financial war between European nations attacking each other's bond markets openly shorting them that led to all of Europe defaulting on their debt. Even Britain went into a moratorium suspending debt payments. This is what put the pressure on capital flows sending waves of capital to the United States that to some degree was kind of like the capital flow to Japan into 1989. This put tremendous pressure upon the dollar driving it to new record highs that were misread by the politicians who did not understand capital flow. They responded with Smoot-Hawley misreading the entire set of facts.'

How does one say ingeminate in German?
Posted by Anonymous Monetarist at 8:01 AM

Could you do a post for the young, or those with enough fire in the belly to try something new, about what industries/jobs look interesting going forward? Because of interesting work, or a chance to watch History, or money, or whatever.

Will reflect upon that.

Not sure what to offer the next generation ... perhaps an apology?

you got a great sense of humor, my little teddy bear.

Laughter is the best medicine.