At Fed's End. Hoist with their own petar; and 't shall go hard. The world as bard, as they play their last card. 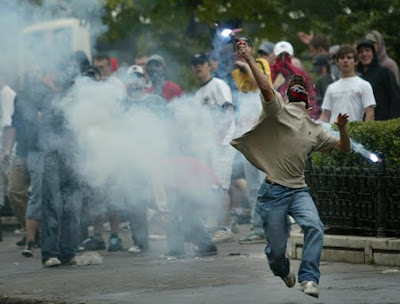 What shall we call the next generation? The busted?

Of course back then we had sound money not found money.

Deflation and depression were interlinked in GD1 of course, but not quite the way most folks believe it was. Inflation expectations were well anchored in GD1 and the black diamond in CPI to mark the onset of that crisis was symmetrical to the pop in CPI in the late 30s. Hyperinflation did not ensue because the 'deflation' more rightly should have been called disinflation, and of course deflation is the midwife of hyperinflation (caught you cribbin' Mr. Edwards.) The disinflation of the 30s was reversed with a 40% currency devaluation, the belief in wizards was strong and well met.

The empirical point to consider though is that this Great Depression is occurring in a sovereign that has the world's reserve currency with a national security apparatus that includes the rating agencies. A volatile mix of mischief that allows folks to not only dispel the administration of medicine but promote the advocacy of alchemy while bloviating on how deflation is truly the hemlock of the people, well at least some of the people.

How does this end? To the sound of great applause, folly's denouement ... and then a long period of silence.

In many ways it is the age old story of Emperors and Pirates, deflation being the Jolly Roger, and a headlong drive into oblivion with the argument that forcing the issue will resolve it. Rummy's chestnut of "If you can't solve a problem, make it bigger."

Methinks the Federales have one 'futile and stupid gesture' brewing to can-kick the ebbing empire, guns and butter redux, although this time perhaps more appropriately phrased as buns and gutter. Ultimately regaled, for those of more modest deportment, as Financial Pornography 101 : Gangbanging a String.

The Fed will end, 2016 is circled on my calendar, hoist with their own petar; and 't shall go hard. The world as bard, as they play their last card.

Posted by Anonymous Monetarist at 7:40 AM