The splinter of our disconnect. Fade to back. 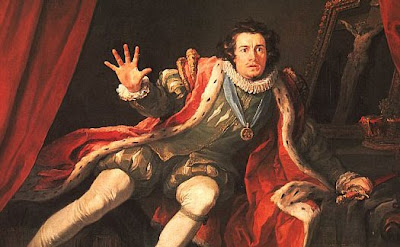 6 year old daughter had been misbehaving during the course of a day. Wife did the old 'wait until your father comes home.' When I arrived home just as the wife was about to regale me with the little one's transgressions, my daughter 'waved her off' and walked towards me with arms extended to support her point; 'Daddy I am still just a little girl, I am going to make mistakes.'

Driving home from my wife's parents the other night.
She notices that our son (4yrs) was playing with a toy...

Mom: Is that your toy?

Son: No Mama, Grandpa and Nana said I could have it for a week.

AM: I think he is making that up.

Son: Its' craziness when you take a toy that doesn't belong to you.

'Now is the winter of our discontent
Made glorious summer by this sun of York;
And all the clouds that lour'd upon our house
In the deep bosom of the ocean buried.'
- William Shakespeare (Richard III),

'There are two mistakes one can make along the road to truth -- not going all the way, and not starting."
-Buddha

The first two above are from my children but it is a fractal of the Federales for most certainly crazy men do make mistakes.

The crystallizing mistake of our age, the crime of the century writ large, the splinter of our disconnect... is this epigram: failure to liquidate the insolvent banksters, to dip rich folks' bad speculative bets into the acid bath of price discovery, has liquidated a large part of the productive economy. And so the blast beat of the cyclic drum plays on as we fade to back.

The American Empire came to a fork in the road and instead of taking it we morphed it into a can.

A quarter century of being prophets of our fate, of the Great Moderation, scratch that the Great Modification, of deficits not mattering, of models over history, is serving up the middle class as a burnt offering and may result in our not being masters of our intermediate future as we black diamond towards the denouement of the trusted.

Just got back from a Colorado Springs conference and had the 'same conversation' once again this time with the cab driver. A decade out from California, the fella was a luxury real estate developer, and he shared two stories which characterizes our zeitgeist.

The first is that of a former client who has a 25 million dollar home (well that was what they paid for it) with several million in equity. They would like to refinance with the bank but they can't because the bank has absolutely no idea how to value it, couldn't even give 'em a number or a range.

The second is that this cabdriving victim of the misallocation of productive capital plans to stock up on guns and ammo and, offering the caveat of 'don't laugh with what I'm going to tell you Mr. Stranger in the back seat', has plans to go to Alaska with a portable home (I forget the indigenous term) to live of the land.

Being a contrarian, I suggested to him that his conversation was one that had been oft-repeated as of late (he agreed his associates were all chortling the same) and suggested that if we do get shaked and baked either through gravity dislocations (astro stuff), history relocations (war following financial crisis), or popular sniping (the manufacture of contempt for it is only a Great Depression if they say it is) the big cities will probably be the safest place to be...

After all, if the s$&% comes down do you really want to be out in the hinterlands with every other fella loaded to bare? Sounds like Mad Max to me.

If I knew the way would most probably share it, but he who has a crystal ball most certainly ends up with a mouthful of broken glass.

This I feel to be true... it is a Great Depression but with different characteristics than our First. You can read the intro to this blog as well as the inception date, your humble blogger dropped the tagline of the Great Depression of 2007 prior to the Noblesse Oblige even calling the recession.

In GD1 what was a fella to do? Collect cigarette butts on the street, sit on the porch, listen to the radio, or mayhaps go down to the Bowery and get in trouble?

Now the choices are a cornucopia of low-cost to no-cost diversion. Juvenal would be proud. Watch a movie , read a book, read a paper, or listen to music all for free via the intertubes and collect the government check. All until that zombie movie comes to your local cineplex entitled 99 Weeks Later.

Among the empirical evidence of our current dilemma are current unemployment levels being empirically worse than the worse levels of the Great Depression Volume 1 - if we apply the same measurement metric. Seriously, you can look it up!

Another nugget is the comparable extremes met in the separation of wealth in 1928 and 2007, which has actually upticked through 2010. B.S. Bernanke certainly did learn the 'lessons' of GD1, did he not?

My trading sensei berated me a few days ago in my commenting that this is GD2, with the bromide 'look at all the affluence around us!' My reply was have you ever read newspapers from 1930 and 1931? - Internally I verbalized Hemingway's chestnut...'{there are two ways a man goes broke}, slowly,and then all at once.' Once upon a rhyme is a'comin.

Here in Cook County homes over $500,000 are not to be foreclosed on (add-on : >$500K foreclosures represent about 1% of total per The King Report), the banks don't want to take the hit, the overextended upper middle class with horsehair splintering probably choosing to go to Disneyland (or Nordstrom's?) as they squat in their hut and dream of... I don't know... joining the cab driver in Alaska?

With the upper echelons of America contributing a disproportionate share of consumer spending, and their primary asset frozen in the ember of a 13-16 year downtrend where the buyers are lower and the sellers are higher (most probably chemically since the securitization market for jumbo has gone dumbo) the cyclic clock is ticking, the alarm anticipated, that will start wholesale regurgitation to flippers who will counterintuititively drag the 'cancer clearing' out as the fast money waits for the the Groundhog Day bounce back of the ever-imminent recovery right around the corner of a round room.

A generational circle smirk as it were.

And with trillions of meatballs thrown at the problem, the reserves at the Fed being nothing more than a dip financing for a generational workout, private demand is down ticking for the first time since 1928? Viva la V-shaped scratch that seeds abounding scratch that nascent scratch that unusually uncertain recovery!

If the inflection point between inflation and deflation is believing in wizards or believing your lying eyes the Oracle at Eccles better fire up the jets prior to meeting with the Jackholios cause people are squinting at the eye chart and rubbing sus ojos.

Now is the splinter of our disconnect
Made glorious summer by this sun of Ben;
And all the clouds that lour'd upon our house
In the deep bosom of our equity buried.

Fade to Back.
Posted by Anonymous Monetarist at 10:37 AM

Good to see you back, it is.

Agree wholeheartedly; good to see you back in action. Look forward to more thought-provocation!