Financial Pulchritude, Ringfence the Multitude, Federales with Attitude, Brother can you spare a Rhyme? 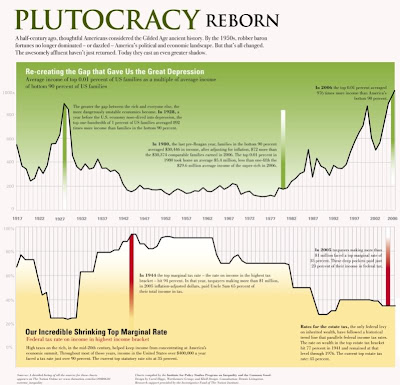 "The worst is over without a doubt."
"American labor may now look to the future with confidence"
"We have hit bottom and are on the upswing"
- James J. Davis Secretary of Labor. (June,Aug,Sept 1930 respectively)

"In other periods of depression, it has always been possible to see some things which were solid and upon which you could base hope, but as I look about, I now see nothing to give ground to hope-nothing of man."
- Former President Calvin Coolidge, (1933)

'He that trusteth in his riches shall fall; but the righteous shall flourish as a branch.'
- Proverbs 11:28

In 1929 the top 1% of households represented 44.2% of wealth and in 1933 they represented 33.3%. On the second data point hangs the prophetic sword with horsehair splintering over the Oracle at Eccles.

As of 2007, income inequality in the United States was at an all-time high for the past 95 years, with the top .01% (yes, that is one-hundredth of one percent) receiving 6% of all U.S. wages.

And the lessons learned by our blessed leaders concerning this Great Depression? Prices cannot go down and wealth inequality needs to tick up. An assemblage of price-distorting wizards locked arm-in-arm struggling to defeat the creative destruction blizzard. The insouciance of elites and the Antoinette economy. Exhibit thyself to a public that may hiss thee, bemoan the solons. Let them eat debt!

'Don't Task Don't Smell', the central plank of the 'I Can't Believe it's Not Capitalism Plan' has given us Sugar Mountain, where stupidity is cupidity.

The cold hard fact of our age is that the bankrupt ideology of the rich that had greatly succeeded in drafting the inner monologue of regular folks so that they would vote against their self-interests is colliding head-on with a Mr. Market that is a bit pissed off that we've inflated it out of the business cycle for the last quarter century. (AM Rule #6)

After World War 2, our blessed leaders, impressed by German 'organizational' skills crafted a policy of manufacture of consent.Over time these techniques moved to the economic realm in an attempt to manufacture content.Federales now risk the manufacture of contempt, for it is only a Great Depression if they say it is. (AM Rule #1)

Truly we need a hero or it is generation zero.

Financial Pulchritude, Ringfence the Multitude, Federales with Attitude, Brother can you spare a Rhyme?

Phat, Plummed and Cupid is no way to go through strife son.
Posted by Anonymous Monetarist at 12:02 PM