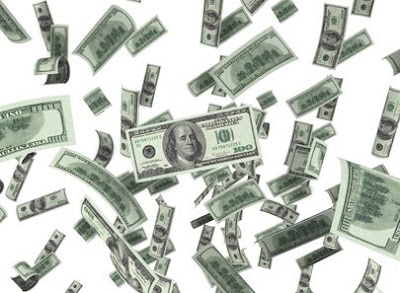 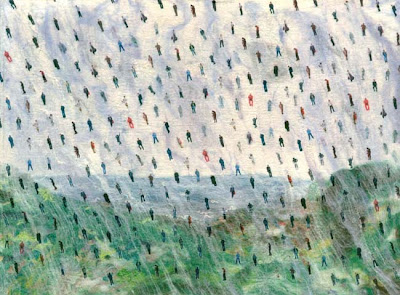 Bloomberg: Bernanke said resuming large-scale asset purchases should boost economic growth through larger borrowing costs and higher stock prices and that concerns about the strategy are "overstated". 'This approach eased financial conditions in the past', Bernanke said.

Once again, here are the top ten reasons why this ends in tears or (hopefully not) fireworks...

10. Nancy Capitalists in a Sovereign Democracy that are Hell Bent to Seek Rent.
9. Although we walk through the Valley of Debt we fear 'No Easing'.
8. Socialized Guts will lead to diminished glories.
7. Failure to liquidate the insolvent banksters has led to the liquidation of a large part of the productive economy.A taxpayer financed bailout of rich folks' bad speculative bets has resulted in zombie banks and zombie customers... a fiscal tide that lifts no boats.
6. The cold hard fact of our age is that the bankrupt ideology of the rich that had greatly succeeded in drafting the inner monologue of regular folks so that they would vote against their self-interests is colliding head-on with a Mr. Market that is a bit pissed off that we've inflated it out of the business cycle for the last quarter century.
5. Mr. Hand's strong dollar policy is the chimera of currency debasement masquerading as America's wealth exporting machine that is regularly promulgated by our leaders as an exceptional example of America's resiliency.
4. Yes Virginia, there is no collateral.
3. The government is 'all in' and can't pull out.
2. Employment, inflation, productivity, GDP, and other sundry stats are massaged into irrelevance ... the markets are rigged.
1. After World War 2, our blessed leaders, impressed by German 'organizational' skills crafted a policy of manufacture of consent.Over time these techniques moved to the economic realm in an attempt to manufacture content.Federales now risk the manufacture of contempt, for it is only a Great Depression if they say it is.

Bernanke institutionalizes the concept of PPT, tinfoil hat comrades?, as the pablum narrative collectively shrugs. The continuation of QE1 is estimated as the equivalent of cutting the fed funds rate by three quarters of a percentage point, per the Fed, and even double this amount would result in no more than a .2 percentage point drop in the unemployment rate by 2011, per Macroeconomic Advisers.

One neither need have stayed at a Holiday Inn Express last night nor need have worn a Sherlock Holmes costume on Halloween to deduce that The Fed's mandate of reducing unemployment is unattainable.

What then of the fabled stratagem of 'price stability'? Stability where? A special sauce applied to the trillions of bad meatballs at the insolvent banks where the excess reserves are nothing but DIP financing for a generational workout? That's the deflationary chasm that has already been disappeared from the ojos of us mere mortals - QSPEs and VIEs existing only in the realm of the Google Cache. Stability through debasing our standard of living for a Potemkin recovery where the commons can enjoy prices declining in things they want but can't afford and prices rising in things they need but can barely afford? Ah, say our solons, stability per the pablum narrative description of Federales Psych ops, the clever chestnut of 'portfolio balance'. The Divine Might of Wizards through buying bonds will increase the 'demand' for those hell bent to seek rent in equities, thus trickling household wealth and the resultant spending to the surplus eaters.

But households only have about 7 trillion in equities and if you calculate equities going up 10% from here that translates into about one-quarter of one percent of GDP.

As the Oracle of Eccles goes on his speaking tour over the next few days what will be said is, given the slack in the economy we have to do something... we have the technology to reduce this portfolio... Washington needs to get its' house in order... and the world needs a vibrant and growing America.

And the Nancy Capitalists with their chalice of confidence raised toward liquidity's faucet chortle, 'It's Raining Ben! Hallelujah! It's Raining Ben!'
Posted by Anonymous Monetarist at 8:43 AM

When are people going to wake up. Thank god for sites like this, and that FFT site over at http://www.forecastfortomorrow.com they have been quite accurate with what has been going on, and what they have been saying is quite spooky.

Would be interesting to sit down and chat with Marty someday, that is, if privacy and discretion could be assured.

He is right about the fractal nature of markets.

However he is wrong about the complexity of fractals.

Fractals are easy...randomwalking is hard.

Marty is right about 8.6, which through the fungibility of Kaballic sacred geometry is the same as .86 (6 divided by 7). That is the prism through which the path of 'understanding' starts. It is a fractal... although most likely self-affine (as opposed to self-similar).

Much like Mandelbrot, Marty does not know why the markets are fractal based.

He feels that the complexity of his models were necessary to understand what Mandelbrot described as the data set of humanity - the markets. After all how could sophisticated and complex creatures such as us not be explained by a theory equally as complicated?

What if in fact the truth were so simple that even a child could understand? Such a theory would truly hide in plain sight for it would fly in the face of what we perceive ourselves to be.

The rhythm of fractal replication... simple, yet somehow always daunting to the I to ascertain.

As someone who trades the 1min, but observes the longer, the replication is there, always.

I find comfort in that, but in the end, its always got one up on I and I.

JK, hope you had some good holidays, and looking forward to the next post.

Some day... far from now... people will look back on these digital footprints, like we do fossils...

And they will say, surely this cat, knew the way.

useful and interesting article, thanks David